Home » Travel » 6 Things NOT to Do on a Cruise
Travel 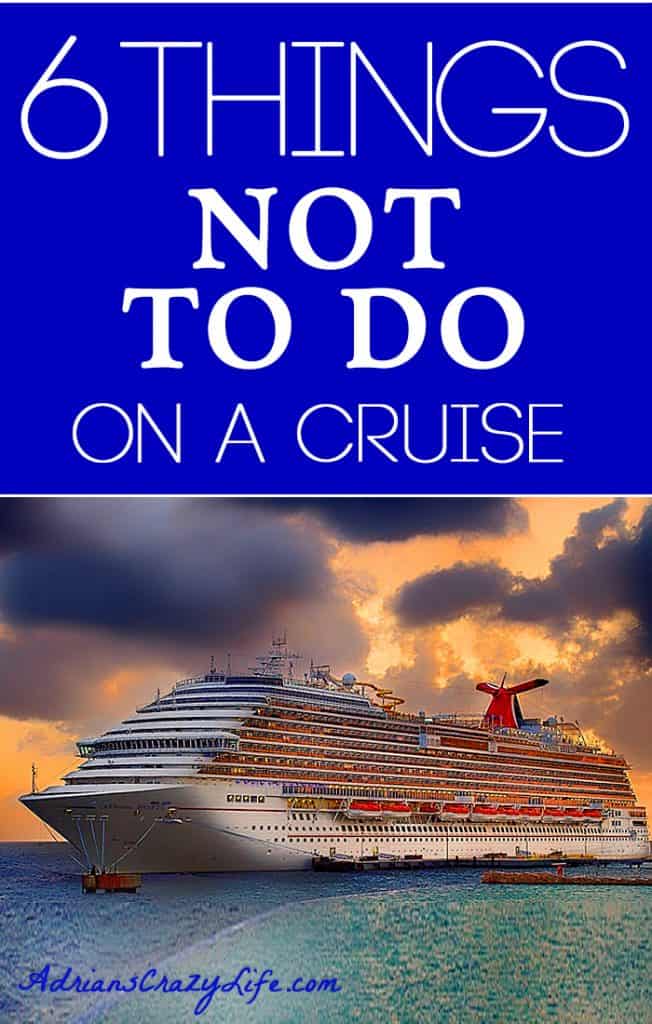 We’ve been on several cruises now and usually we meet terrific people onboard the ships.  However, there are a few people who are memorable for all the wrong reasons.  So, just for giggles, I came up with a few ideas for rules I’d love to post on a ship for things NOT to do on a cruise – unless you want to be the most disliked passenger at sea.

This guy thinks he is the only person on the ship who matters and he is going to let everyone know it.  Do yourself a favor – don’t be this guy.

Someone who is kind, friendly, and considerate to others on the ship will be a lot more popular ol’ Mr. Big Shot.

One of Mr. (or Ms.) Big Shot’s favorite little tricks is to get up early and stake out a deck chair with a towel and a cheap pair of flipflops or an old paperback and then tie it up for hours until he or she is ready to adorn the deck with their presence.

I’ve learned that a nice word to one of the crew usually frees up a deck chair like that pretty quickly.  Buh-bye Mr. Big Shot!

I watched a typical Mr. Big Shot pitch a childish hissy fit because the waiter (who didn’t speak great English) brought him hash browns instead of corned beef hash!  Really?  Roll with it dude.  Make some nice conversation with your neighbors and wait patiently for the staff to correct the mistake.  Your tablemates would have thought much better of you for it.

A little good humor and flexibility goes a long way towards ensuring that everyone has a good time on the ship, even the hard-working crew members.

There’s a lot of drinking on a cruise ship and most people don’t have a problem with it.  People are on vacation and if they want to have a few drinks and enjoy themselves, no one really cares.  But there’s a thin line between tipsy and fun and drunk and obnoxious.

But when someone is staggering around on the ship, or drunk enough that they are puking, that’s not fun, it’s obnoxious.  Same thing for the overly amorous couple – ewwww.  Get a room, folks.

Not to mention – the LOUD drunks.  I think those are the worst.  Heckling the comedians, having loud conversations during the shows, laughing hysterically at the slightest thing – that does not make you someone that your shipmates are going to enjoy being around.

For our 25th Anniversary cruise, we splurged on a balcony cabin and it was heaven!  Until Mr. and Mrs. Drunk and Obnoxious in the next cabin decided to have a huge fight with the balcony door wide open.  That pretty much sucked the fun out of that whole evening.

Pet Peeve #3 – Guess Who is Coming to Dinner.

Don’t be a jerk at dinner.  One of the things we really enjoy about cruising is the dinner seating.  We’ve met some really wonderful folks at our dinner table, but some we haven’t enjoyed so much:

Here’s my little secret – I ask the maitre d’ to put us at a large square table (because at a round one, you are pretty much trapped between two couples).  Then I try to get there early on the first night and stake out a spot towards the middle of the table.  That way you can talk to the people across from you and on both sides, and if someone is not your cup of tea, you can mostly tune them out in favor of the nice folks.  If not, there’s always the last resort – ask the maitre d’ to move you to another table.

I do have to warn you though – last time I tried that, I ended up running into all the people from the original table all over the ship and it was pretty awkward.  I finally lied and said I’d run into a friend from work and wanted to sit with them.

Anyway, the point is – use your company manners.  Try to be nice, be interested in the other people, and I guarantee you’ll make some amazing new friends.

When things go wrong – it’s so much easier to just roll with it and move on.  The most valuable lesson I’ve learned on a cruise is that a few things ARE going to go wrong here and there.  You can pitch a hissy about it and ruin everyone’s time, OR you can be a good sport and just roll with it.  On every cruise, a few little things have gone wrong.  One time we had a miss a port because of choppy seas, our parasailing activity was canceled due to high winds, we had to wait an hour extra to debark for an excursion.  It’s just little stuff really, but some people got really bent about it.

No vacation is going to be completely perfect and it’s not very realistic to expect every little thing to be perfect.  But, you know what – you are on vacation.  You’ve paid a ton of money to be on this gorgeous ship in whatever wonderful place you’ve chosen to go – Enjoy it!

If you act like a good sport and find a way to have fun anyway, your fellow passengers will too.  Calm and good humor are contagious, but so is being grouchy and dissatisfied. I always go out of my way to be pleasant to the staff. They don’t have an easy job, but if you take the time to learn their names and smile at them and greet them warmly every day, they’ll find a way to show their appreciation.  You might find an extra chocolate on your pillow, an extra scoop of ice cream on your dessert, or a little hint on where’s the best place to see the dolphins playing by the side of the ship.

One of the things we really enjoy on a cruise are all the silly games they play – particularly the trivia games.  The grand prize for these games is a plastic model of a ship and we very proudly have two of them on our mantle.  We won them fair and square because we have a ridiculously good memory for obscure facts and we always enjoyed the playing the games whether we won or lost.

However, there is a certain brand of greedy folks who figure if something is free and other people want it, they are going to make sure that they get as many of them as they can.  That is so incredibly obnoxious.  Most of these games are self-scored, and it’s just for fun, so they don’t exactly check to see if people are cheating, but on every cruise, there is that one family that just cheats outrageously so they can win a bunch of prizes and it just spoils the whole game for everyone.

They may win the prize, but they certainly lose the respect of all the other passengers trying to enjoy the game.  Play fair – don’t like be the Cheaty Cheaters!

And speaking of greedy – don’t go overboard (so to speak) on the food.  The whole ship is stocked with PLENTY of food – they are not going to run out.  Enjoying the great food is part of the fun of a cruise, but don’t be disgusting about it.

You know, those people at the buffet who are trying to “get their money’s worth” by piling their plates with everything but the ship’s anchor!  I don’t envy them the stomach aches or the pounds they are going to put on by the end of the cruise.  What a waste – er, waist!

So, that’s it.  These are my best tips on things not to do on a cruise.  If you’ve been on a cruise, what are some of yours?

I have LOTS of great cruise posts – if you’re considering one, you might want to check them out.

18 Comments on 6 Things NOT to Do on a Cruise