It’s been a while since I’ve done a post just for fun.  I thought I’d introduce my cat, Yeti.  Isn’t he pretty?  I keep telling him he’s way too pretty to be a boy.
But don’t let all that fluff and those ice blue eyes fool you, he’s a little stinker. 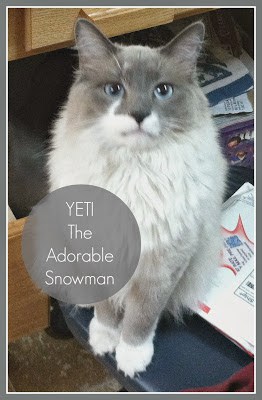 I’ve had a lot of cats in my life and most of them had some pretty good quirks, but this one is a real firecracker.  For instance, there’s this little stunt, which earned him the title of Osama bin Charmin.  He’s mostly grown out of it now, but this used to be a pretty frequent occurance.  One day, he got 3 different rolls from 3 different bathrooms.  For about a year, I had to spray every roll with a very strong cinnamon scent to break him of it.

This is him with my son Matt.  Matt named him – the first time he saw him it instantly just popped out – Yeti the Adorable Snowman.  But even when he was tiny like this, he was the undisputed “Alpha Male”.  He would march right up to our enormous St Bernard without a trace of fear and push the other cats away from the food, even when they were twice his size.  He even tries to bully US out of our food!  I can’t think of the last time I sat at the table, or was preparing food on the counter that there wasn’t a sneaky little paw reaching up trying to talk me into slipping him a tidbit.  If he was just a few inches taller, he’d be pulling himself up onto the table.  And if you get up from your chair, you have to either take your food with you or have someone watch over it or it’s HIS.
The funniest thing about him is his obsession with all things plastic.  It’s kind of scary because I can’t have any balloons, plastic bags, rubber bands, or cellophane wrappers anywhere in the house or he will eat them and that could be the end of him. It’s second nature to me now to constantly police the house for “chewables”.
See these?  They are his bracelets and he is OBSESSED with them.  You’ll notice he couldn’t leave them alone long enough for me to get a picture of them.  He saw them from clear across the room and jumped up on a four foot counter just to be close to them.  We call them his “precious” ala Gollum because he is at that level of obsession. 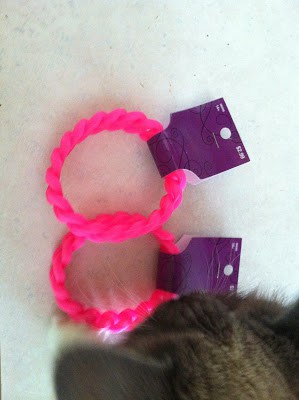 He fetches them.  Yes, fetches them like a dog.  We throw them, he brings then back and then he waits for us to throw them again.  It is his LIFE.  We keep them in a special drawer and if he hears that drawer open, he will RUN clear across the house and leap up on the desk trying to get into the drawer.  Actually, he figured out how to open the drawer, so now we have to store them in a cabinet above the drawer.  His favorite thing is for you to throw them into the bathtub for him.  He does a sort of bank shot off the rim of the tub and then gets them in his mouth and brings them back out of the tub for you to throw again.
Yes, he’s crazy.  But if you can’t find a bracelet, he will happily settle for a green army guy instead.  We keep a whole basket of them on the bathroom counter, so be careful if you try to go to the bathroom in our house because he will TRIP you trying to get into there before you can shut the door.  Don’t believe me?  Here’s a video. 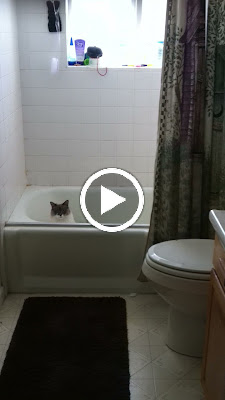 And like all cats, he LOVES boxes, bags, suitcases, laundry baskets, and anything he can climb into and hide.  Trying to pack for a trip is just like having a toddler in the house – it just drives him wild with curiousity and he is constantly either climbing into the suitcase or laying on your black clothes so he can get his white fur on them.  With all that fluffy white fur, I live with a lint brush in my hand!  The other day, I was working on a big Scout fundraiser and I had to physically remove him from my stacks of paperwork at least 10 times!  I finally had to just lock him out of my office.  He just wanted so badly to be right in the middle of everything.
I think it’s hilarious when people say that cats are so aloof.  This guy is not anything like aloof.  He sleeps in my bed most of the time – UNDER the covers, purring like mad.  If you come to our house, he will come right up to check you out.  He’s probably hoping that you’ve brought him a new “Precious” to play with, or some toilet paper to shred.  Yes, he’s crazy, but where else but the Crazy House for a crazy cat like Yeti?

10 Comments on Yeti the Adorable Snowman