Even though my kids are in their 20’s and 30’s, they had just as much fun as the little kids.  We’re a fun family who likes to vacation together and have a blast no matter what we are doing.  This has definitely been one of our favorite vacations together.

Where Is The Wizarding World Of Harry Potter? 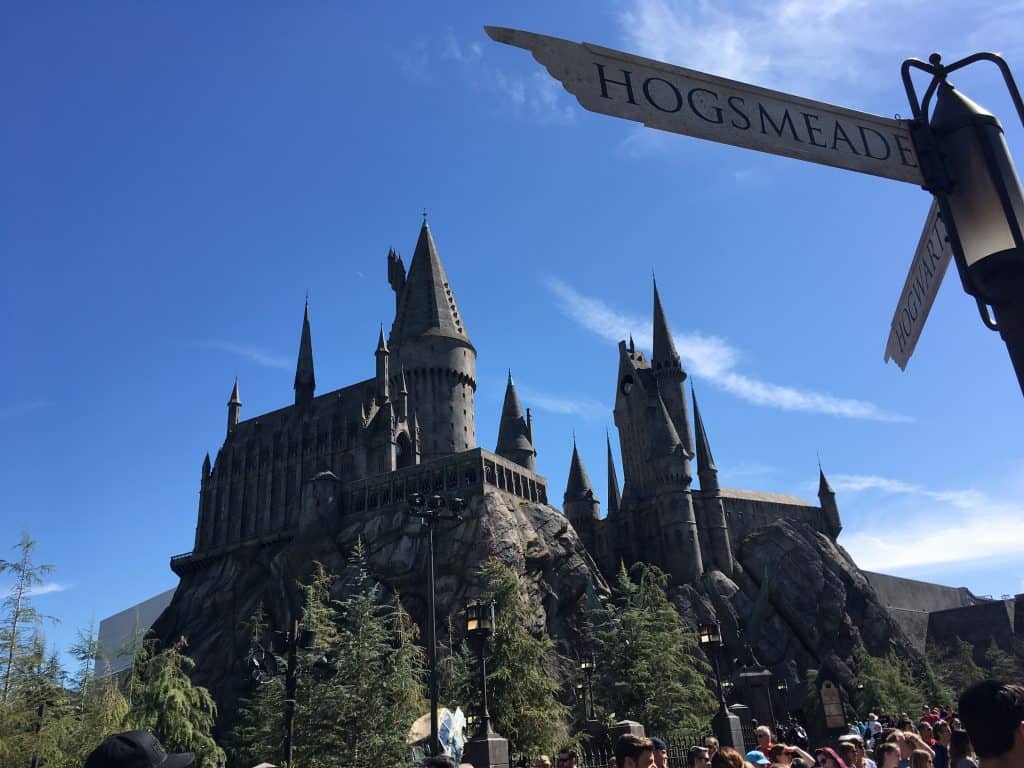 How Long To Visit Wizarding World Of Harry Potter 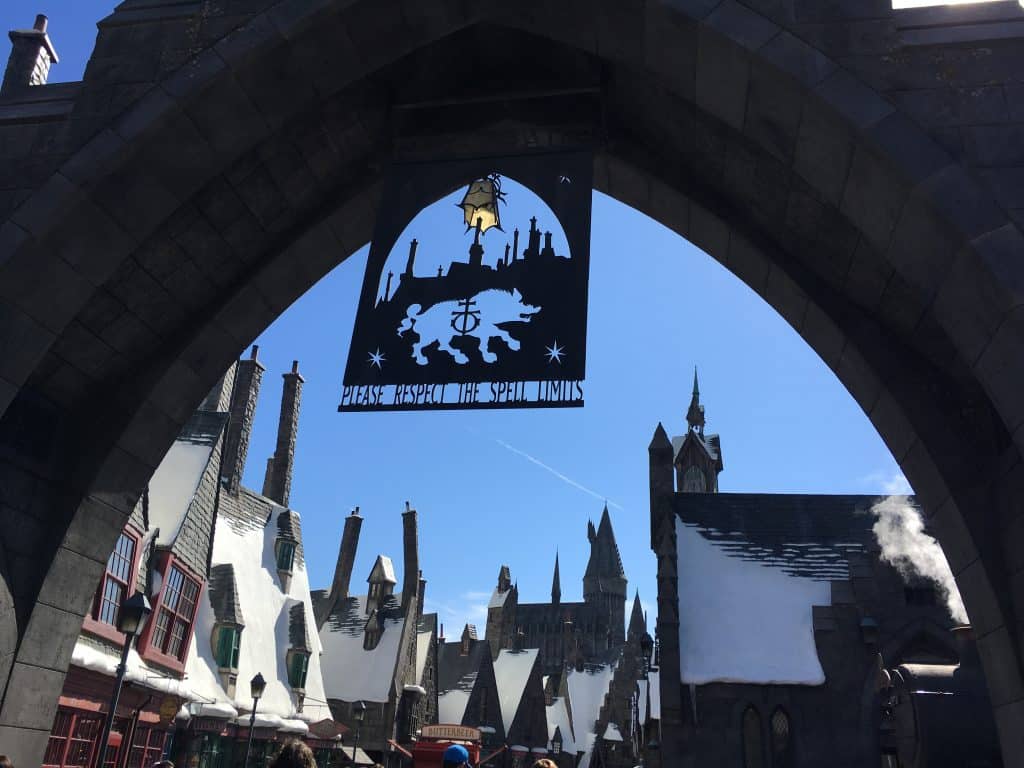 Where To Stay When Visiting Wizarding World Of Harry Potter

Universal Resort hotels offer many amazing perks to guests who stay on site. There are a total of 8 properties onsite at Universal, and they are broken down into categories that include premiere, preferred, prime value and value accommodations. These include:

Value: Both Endless Summer Resorts, Surfside Inn and Dockside Inn. These are an amazing deal at $91+ per night.

Off Site Hotel: Of course, there is always the option of staying off site in Orlando. If you’re on a tight budget then this may be the best option for you. Staying off site gives you more bang for your buck, but you’ll also miss out on the Universal perks. There are an incredible amount of options for every budget in Orlando.

The Perks Of Staying On Site At Universal

For those visiting Wizarding World Of Harry Potter the biggest perk will be that all on site resort guests have Early Park Admission. This allows you to enter the park an hour before it opens to enjoy select attractions. For those interested in Wizarding World this will make all of the difference. The complimentary water taxi or shuttle service to the parks only sweetens the deal.

If you’re a Harry Potter fan like we are, you’ll be mesmerized as you enter the magical Diagon Alley. Here you’ll find dining, shopping, shows and several amazing rides. Keep an eye on the dragon atop Gringotts Bank, it spits fire every 15 minutes. You can’t miss it if you are in Diagon Alley because you’ll hear the dragon rumble to life.

My whole family has read ALL the books and seen ALL the movies multiple times.  We are truly huge Harry Potter fans, so it was just magical to be able to see the classic scenes and settings from the movies show up in real life. 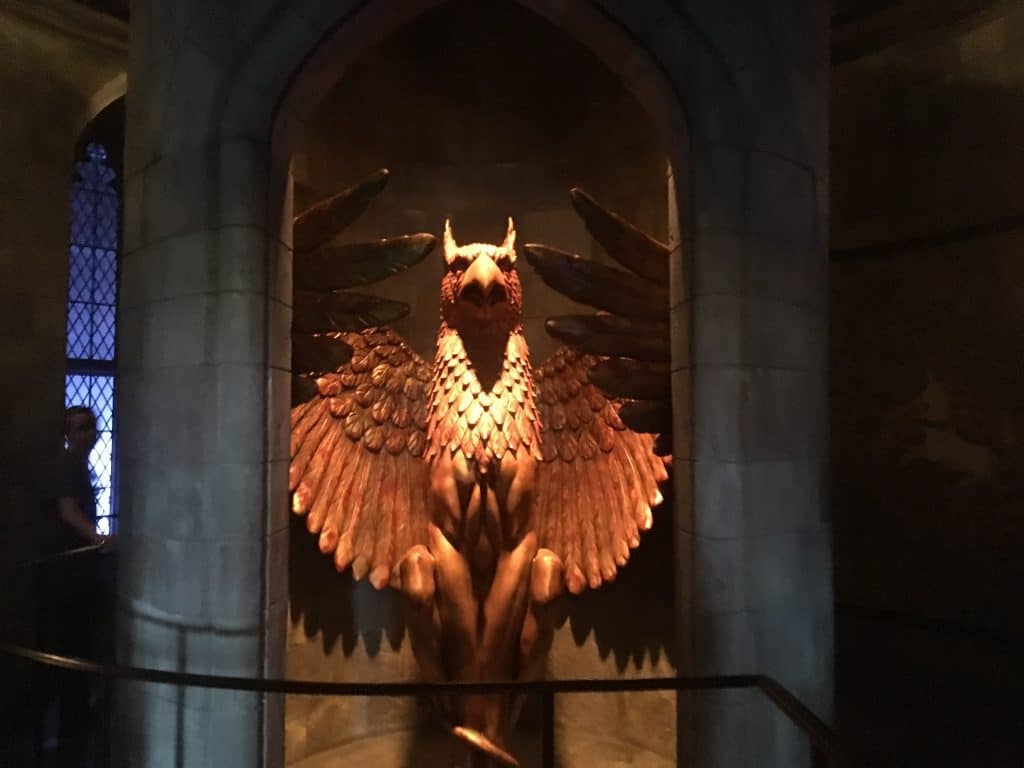 Attractions And Rides In Diagon Alley

Harry Potter and the Escape From Gringotts

On this action packed ride you’ll see the goblin bank tellers counting money as you enter the opulent Gringotts queue. Then you will go on an underground adventure where you’ll need to evade the evil clutches of Voldemort and Bellatrix with the help of Harry, Ron and Hermione.

To get from Diagon Alley to Hogsmeade you’ll take the Hogwarts Express from King’s Cross Station. As you travel through the English countryside you’ll be treated to the same sites that Harry, Ron and Hermione view on their way to Hogwarts each year.

Tip: Make sure to ride the Hogwarts Express both ways because the rides are different and the scenery and experience changes depending on direction. 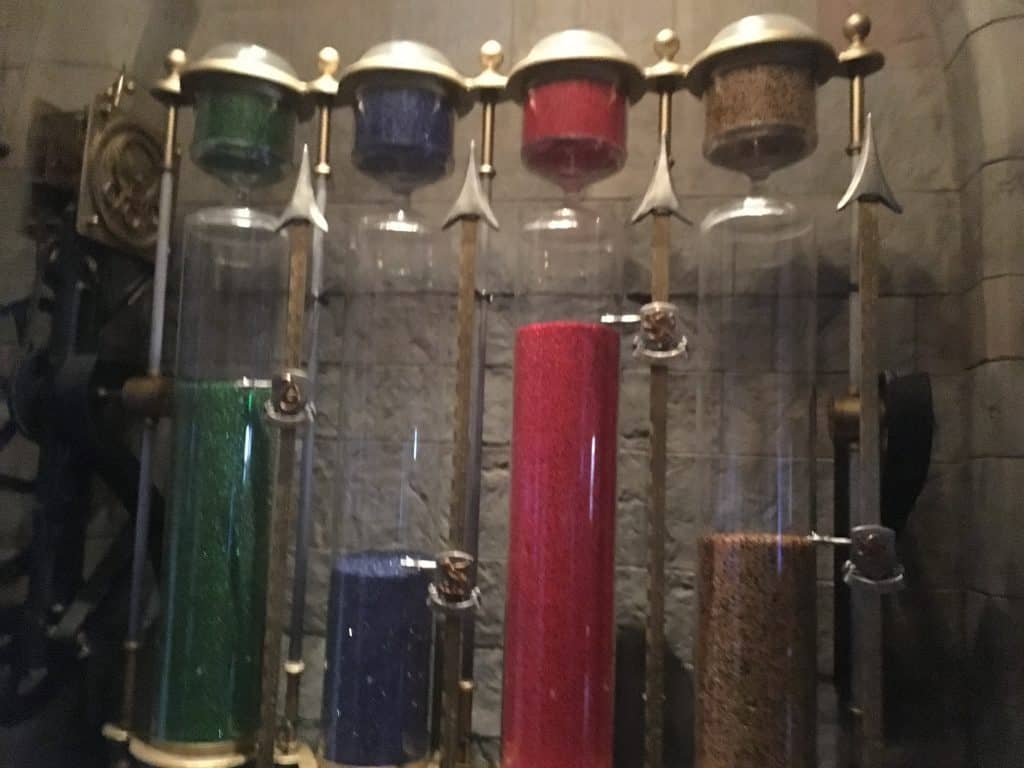 Everyone knows that Ollivanders is THE place to get your wand in the Wizarding World of Harry Potter. As you enter Ollivanders, you’ll notice wands stacked to the ceiling just waiting to choose their wizard. Take in the show where one lucky guest is chosen by Mr. Ollivander to find their perfect wand. Or simply enter the store and shop for your favorite character’s wand.

My nephew has a whole collection of different wands, so I had to grab one to bring back home to him.  I think Fleur de la couer’s wand was the only one he didn’t have. I just love the artful clutter here. Makes it look more authentic. 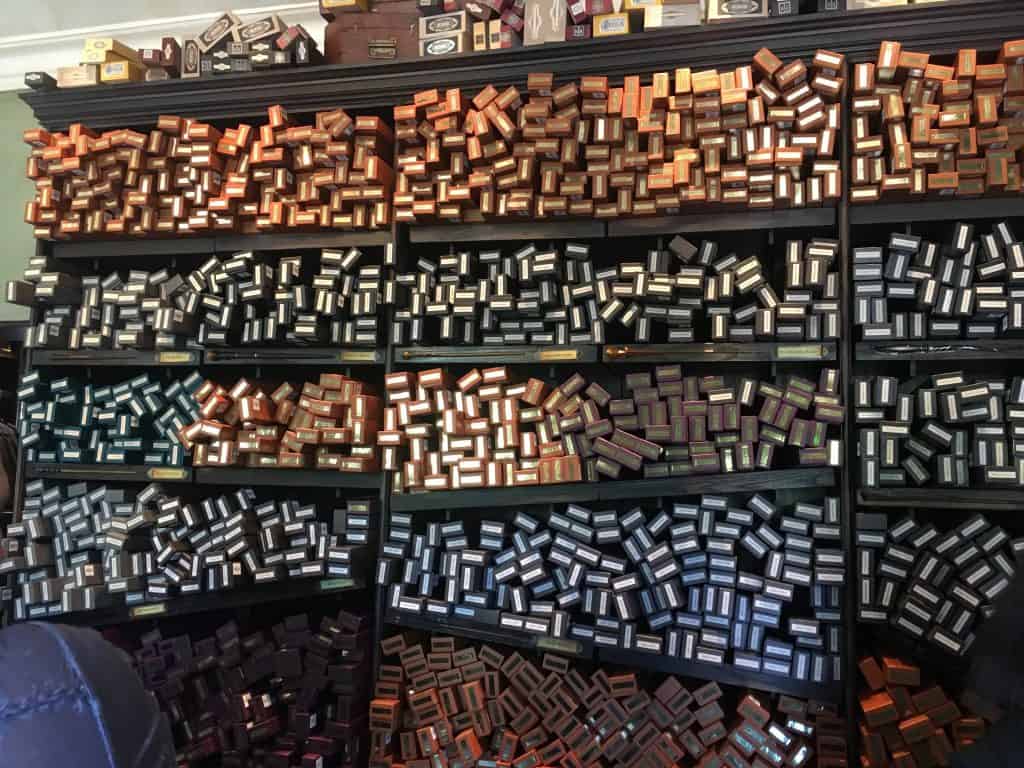 Tip: Interactive wands are sold exclusively at Wizarding World of Harry Potter. These wands allow young witches and wizards to perform spells throughout Diagon Alley and Hogsmeade. You’ll notice the metal placards on the ground where spells can be performed. We had one a friend had lent us and it was really fun to use.

As you head toward King’s Cross Station you may notice the large purple Knight Bus on the London embankment. The triple decker bus helps stranded witches and wizards in emergencies. Make sure to talk to the Knight Bus driver and the shrunken heads!

For a fun way to fully immerse yourself at Diagon Alley, visit the goblin bank tellers at Gringotts Money Exchange. Here you can exchange your money for Gringotts bank notes and use them for purchases in Diagon Alley and Hogsmeade. They also make great souvenirs. 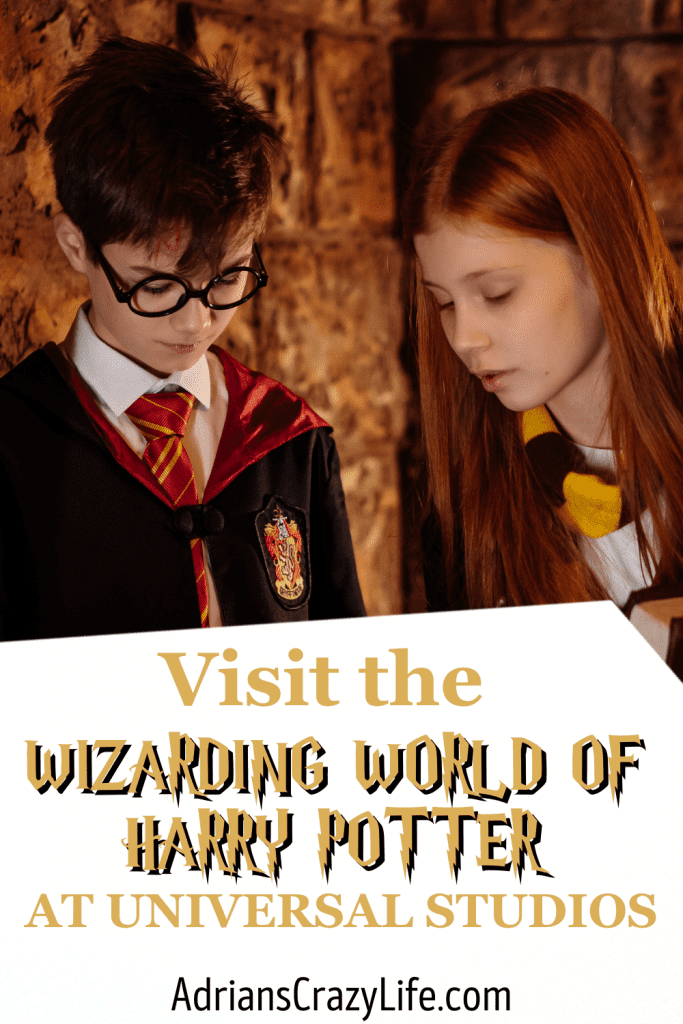 The Tales Of Beedle The Bard

Celestina Warbeck And The Banshees

The singing sensation of the Wizarding World, Celestina Warbeck shares her magical voice and talent in this Diagon Alley show. The performance features never before heard hits like, “You Charmed The Heart Right Out Of Me.”

The premiere eatery in all of the Wizarding World of Harry Potter is the famous Leaky Cauldron. They serve traditional British fare including Bangers and Mash, as well as Fish and Chips. This quick service option also serves a full English breakfast each morning, and delicious desserts like sticky toffee pudding.

On a warm day at Diagon Alley there is nothing better than Florean Fortescue’s ice cream. This soft serve ice cream establishment dishes up delicious Butterbeer and Earl Gray ice cream day and night. They also serve pumpkin juice and sweet treats like crumble cakes.

This famous creepy shop is located in Knockturn Alley and is known for the bad reputation of its patrons. Here you’ll find Death Eater masks, skulls and a very special vanishing cabinet in the corner. They also sell apparel, accessories and collectibles.

Madame Malkin’s Robes For All Occasions

This is the place in Diagon Alley to get your official Hogwarts uniform. Not only that, but Madame Malkins also sells house scarves, ties, sweaters and even jewelry.

Run by the infamous Weasley twins, Fred and George, this shop has tons of personality. Filled with colors and sounds from the movies and a few surprises. Take your time here to take in all the small details.

Hogsmeade is the magical village below Hogwarts School of Witchcraft and Wizardry. You’ll find dining, shopping and some of the most popular Wizarding World rides here.

Rides And Attractions At Hogsmeade 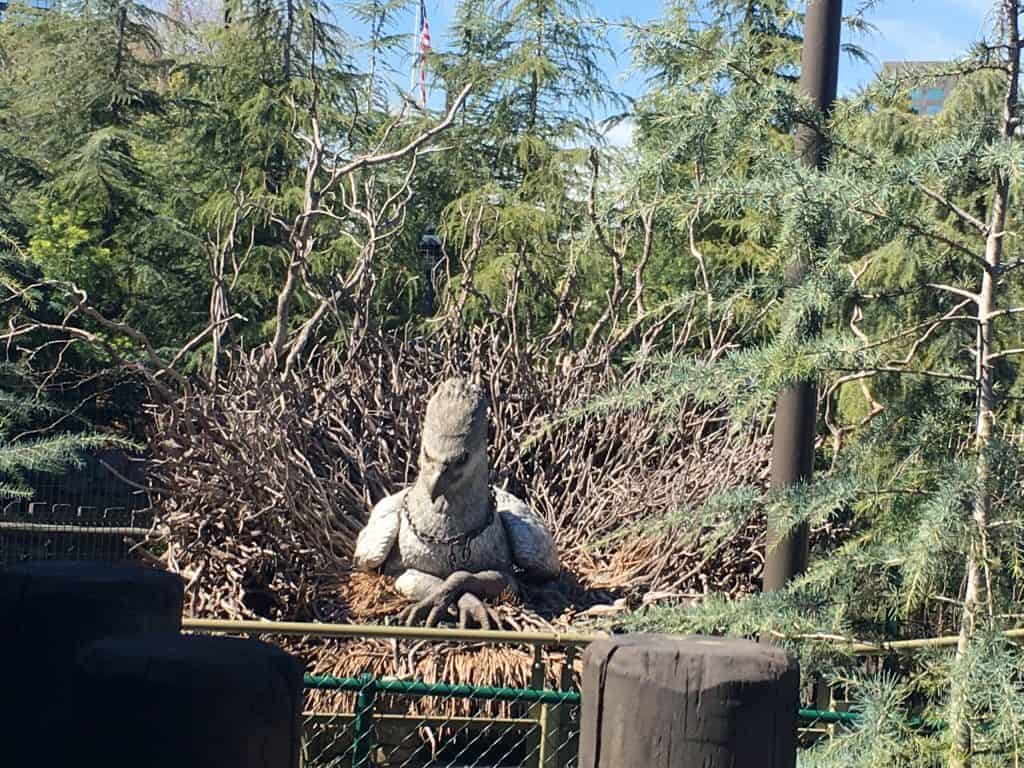 Harry Potter and the Forbidden Journey

As one of the most popular rides at Islands of Adventure this is a fan favorite. The queue is inside Hogwarts castle and the interactive nature makes the long wait times fun. Once on the journey you’ll fly through the grounds of Hogwarts on the ride of a lifetime. A word of caution, adults often leave this ride feeling dizzy and nauseous.

This spectacular illumination of Hogwarts castle shows darkness descending upon the famous wizarding school. You’ll see Hogwarts cloaked in Death Eater symbols as dementors fly around the grounds. The lights and music really make this show quite an  experience.

The Nighttime Lights At Hogwarts Castle

This illumination event is a great celebration of the Wizarding World of Harry Potter. Taking place on select nights, watch in awe as the dazzling lights and music unfold to have the most magical end to your day at Wizarding World. This is a beautiful sight and well worth the time to watch.

At this show, in Hogsmeade, you’ll get to hear the musical stylings of the choir of Hogwarts Schools of Witchcraft and Wizardry. Complete with giant croaking frogs just as they are in the Harry Potter films.  We did manage to catch this one and I was really impressed with it. 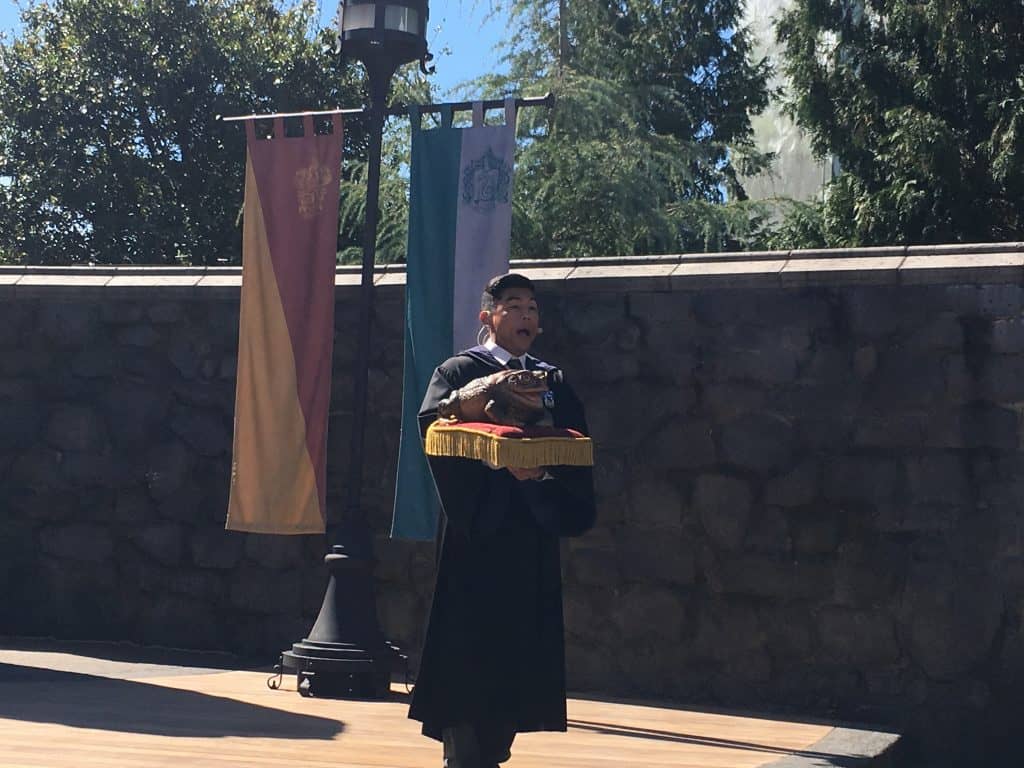 Widely known as the place both students and teachers gather outside of school, you’ll find the Three Broomsticks in Hogsmeade. This quick service eatery serves traditional British food including Shepherd’s Pie and Turkey Legs.

Located in the back of the Three Broomsticks is Hog’s Head pub. You can grab a Butterbeer, Pumpkin Juice or imported beers and specialty drinks with a magical twist. Get the Frozen Butterbeer – it’s such a treat!

This sweet shop is legendary with the students of Hogwarts. Make sure to get a few chocolate frogs, cauldron cakes, and Bertie Botts Every Flavour Bean during your visit. I was a little disappointed with this shop.  Nearly everything was chocolate and while I LOVE chocolate, try carrying some around on a hot summer’s day in Florida!  So you are mostly limited to Bertie Bott’s Every Flavour Beans, rock candy, and those big fancy suckers to take home for gifts. 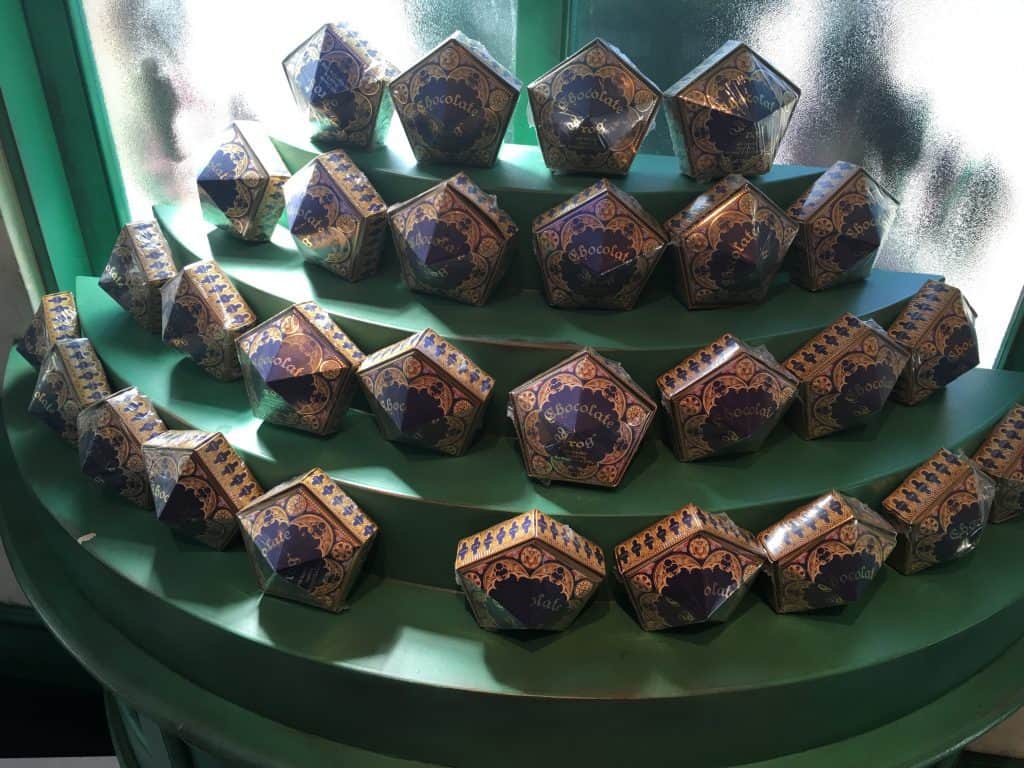 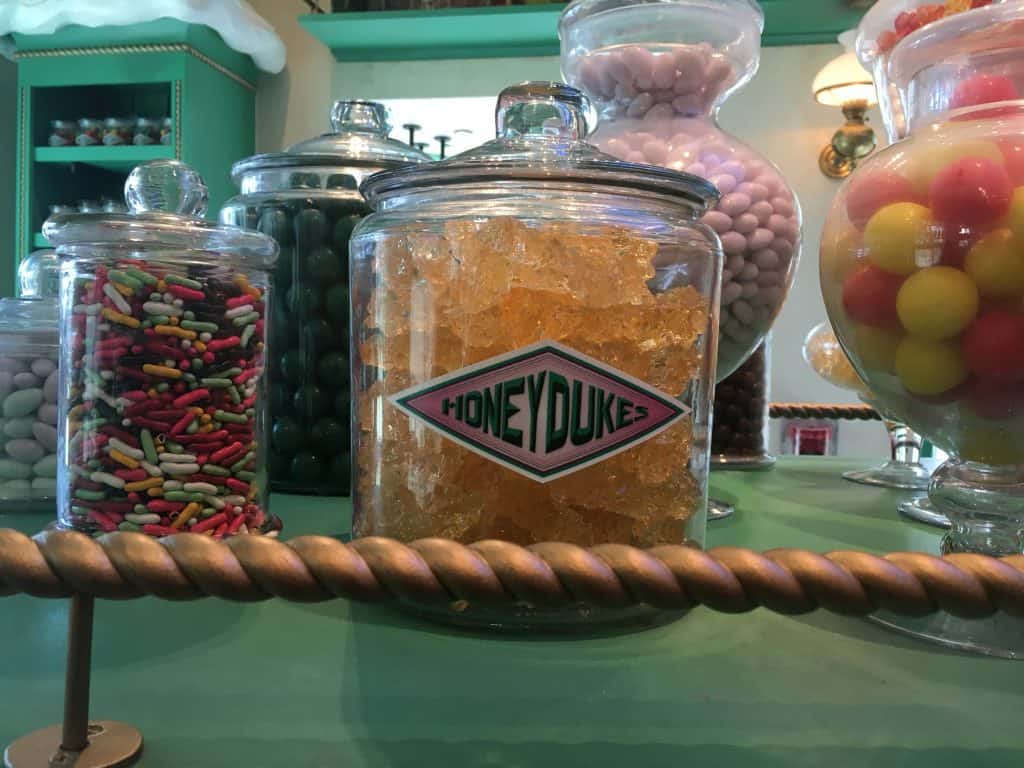 If you’re a fan of Quidditch then this shop is for you. You’ll find brooms, golden snitches and your favorite Quidditch team t-shirts. You can also purchase Hogwarts uniforms here. 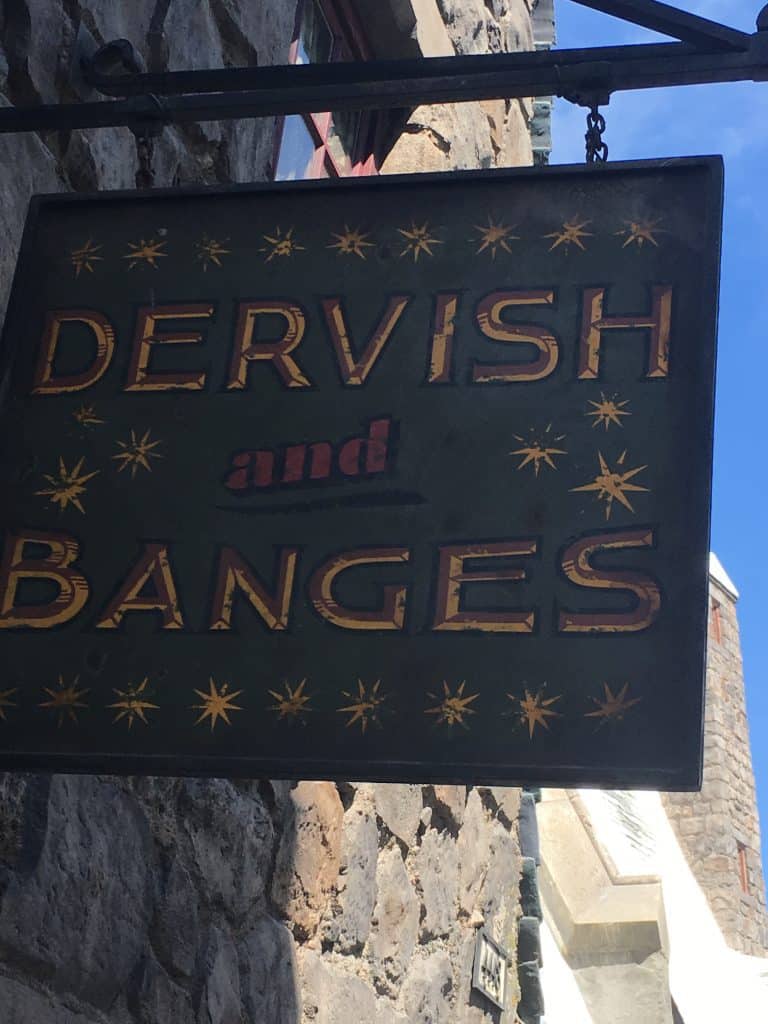 For all your stationery needs stop at the Owl Post. You can also mail letters complete with the official Hogwarts stamp and postmark.

Tip: While at the Owl Post, you may notice that different owls pop out at different times of the day, like a cuckoo clock.

At Diagon Alley you will find 12 Grimmauld Place, the meeting place of the Order Of The Phoenix, where you can catch Kreature leering out the window. 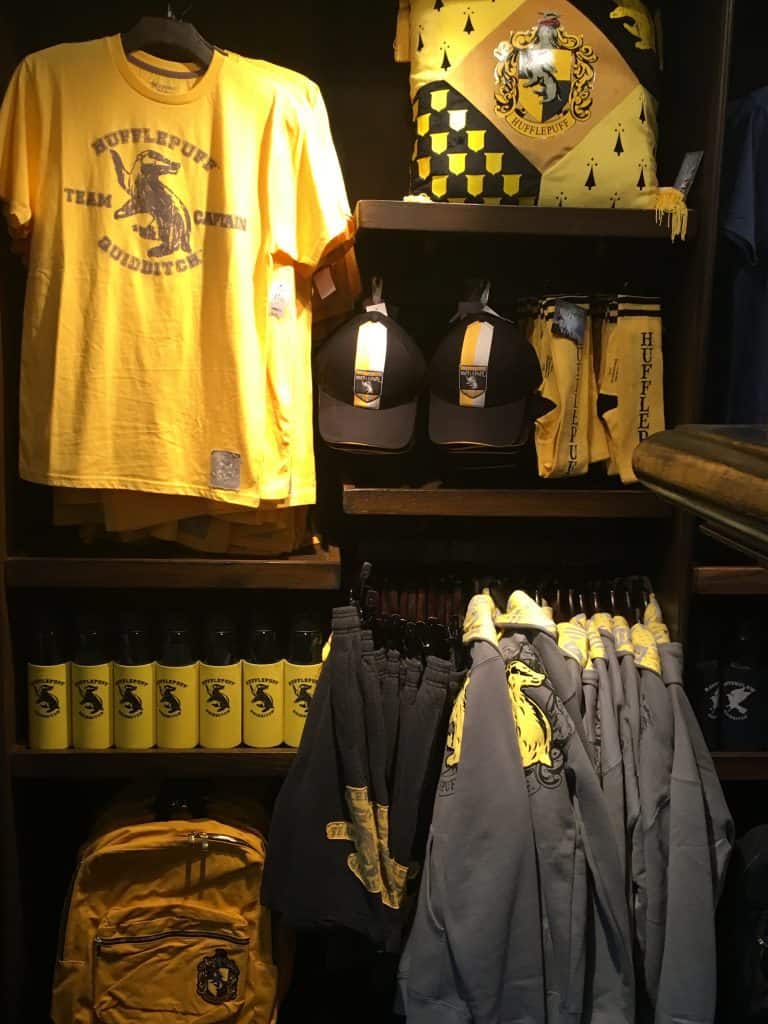 Butterbeer comes in several different varieties and you’ll want to try as many as possible. These include:

With Park to Park Passes, the easiest way to get back and forth between the parks is by riding the Hogwarts Express. Ride it both ways for different experiences.

Any time spent at the Wizarding World of Harry Potter will ensure that you and your family have a magical time!

Here are some other travel posts you might enjoy:

10 Fabulous Travel Tips to Be Ready to Travel Anywhere

7 Socially Distant Travel Options In The Western US