If you want to spend dramatically LESS, try switching from plastic to all cash.  It will make you so much more aware of what you are spending and you’ll think about your purchases more carefully since cash is a limited commodity while plastic seems to be unlimited (although it really isn’t when that credit card bill shows up!). 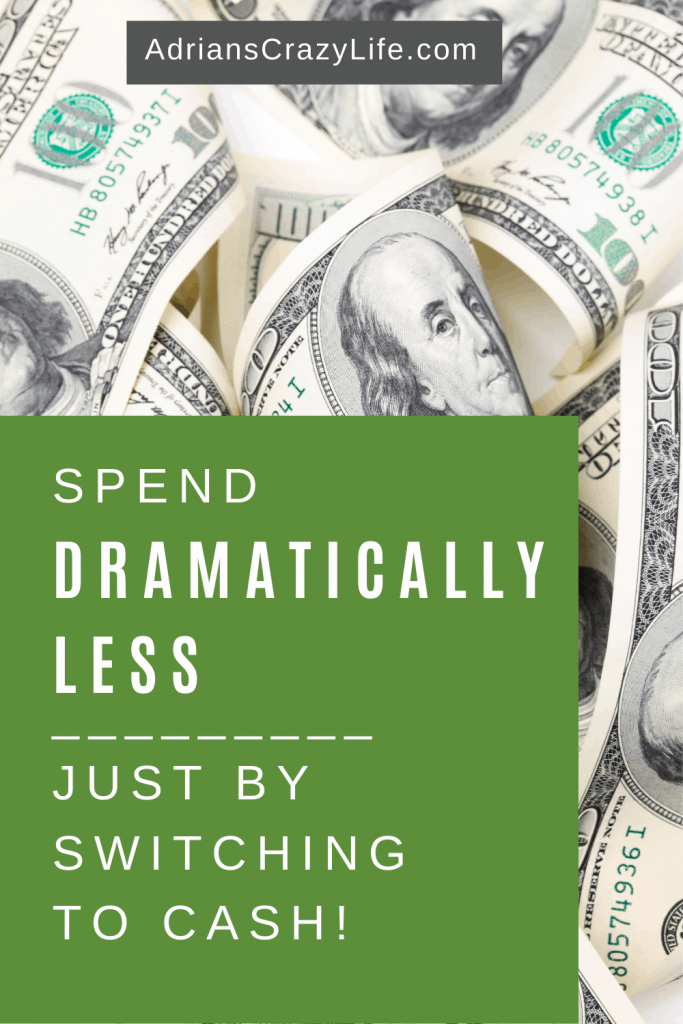 How People Act Differently When Paying with Cash

Behavioral scientists have done probably hundreds of experiments over the years that clearly prove we have an emotional connection with actual cash that we don’t have with other forms of payment.  Here are a couple that I remember hearing about:

You can bet that we aren’t the ONLY ones who have access to this research.  Every Corporation ever invented knows this research backwards and forwards.  They plan their sales strategies to get you to use ANY non-cash form of payment because they KNOW you will spend MORE than if you pay cash.  The stinkers!  I don’t know about you, but I get a big kick out of doing the exact opposite of what Corporate America wants me to do.  I’m just contrary that way.

They actually had commercials a few years ago that were blatantly anti-cash.  They would show dancing water, rotating flowers, and tons of happy people moving in unison to happy music.  Then everything would come to a screeching halt whenever someone stepped up with cash in hand.  Then someone would whip out a piece of plastic and boom, all the music would start up and all was right with the world.  That was about as subtle as a ton of bricks.

Here’s WHY they don’t want you to pay with cash:

I used this strategy on my son a while back.  He had a gym membership and like most people (read my post on gym memberships and why they’re a ripoff) that he hadn’t been using.  It was set up on automatic payments (here’s a link to why automatic payments are such a terrible idea!).  So he really didn’t understand that he was totally WASTING his money.

So, I told him to imagine going into that gym every month, reaching into his wallet to pull out a nice, crisp $20 bill and hand it over to the muscle-bound guy at the front desk.  Then just turn around and walk right back out the door.  That was the reality of it.  But he couldn’t see the PAIN until we put actual cash into the picture.  He called them up and quit the next day!

Wanna spend less money?  Switch to cash and skip the debit or credit card.  It will help you SO MUCH!

That’s why those envelope budgeting plans really work.  The ones where you put all your money for the month into different budget envelopes.  It’s a lot like Weight Watchers – you only get so many points and then you’re DONE.  No wiggle room – you spend money here, you have to take it from there.  Lawyers call that a bright white line – the clear difference between right and wrong.  And it works beautifully, just like Weight Watchers.

That’s why when I’m really broke, or when my spending is particularly out of control, I immediately switch to cash.  It’s always a big eye-opener for me and I usually get my finances back under control at that point.  I get that a lot of retailers aren’t thrilled with accepting cash, but it is still legal tender and they will accept it if you are serious about it.

Pop Quiz:  How often do you go on a strict cash basis?  Probably not often enough…

PS:  Tonight we learned the flip side of paying with cash.  You can LOSE it 🙁

To teach my High School-age son exactly this lesson, I gave him a $50 bill to pay for his back-to-school supplies.  I figured if I gave him fifty, he wouldn’t be able to sucker me into buying a hundred dollars or more worth of stuff.  Plus he was happy at the idea to totally pick out all his supplies.

But then he came up to me with that look on his face – you know the one.  The “something really bad” look.  Sure enough, it had fallen out of his pocket. Kids!  Fortunately, Target shoppers are apparently very unobservant, because he retraced his steps and found it on the floor by where he had been shopping – whew!  So that is the downside of cash, but if you put it in a proper wallet and not a pocket, it’s much less likely to get lost!

Here are some posts you may enjoy:

10 Secrets of Women Who Always Have Money

10 Comments on Spend Dramatically Less by Paying With Cash