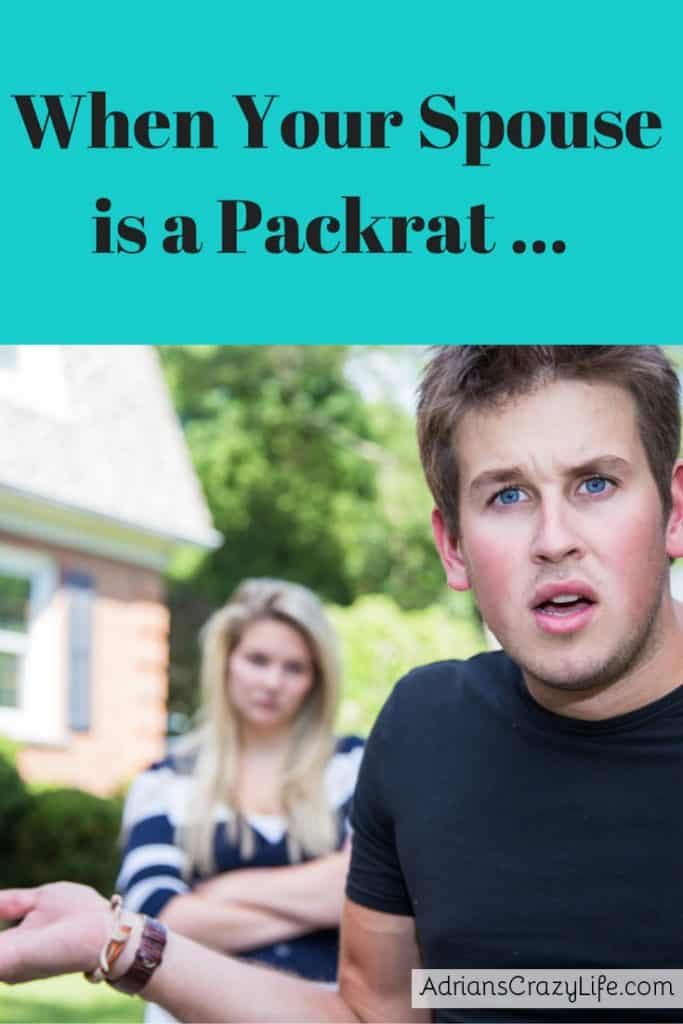 One thing I hear from a lot of my readers is that they have a messy house, but it isn’t their fault.  They are fairly neat and organized themselves, but they have the misfortune to live with someone who is a collector, a packrat or maybe even someone with mild hoarding tendencies.  This can cause serious strain to the relationship – sometimes on a daily basis and has been known to end in divorce or some major fighting.

We lived across the street from a fairly serious hoarder for about a decade.  She was such a nice lady and a good neighbor, but I always felt so sorry for her.  She spent nearly every spare moment arranging and rearranging her “treasures” (mostly broken items from garage sales and thrift stores).  The other neighbors and the city were always bugging her about it and it caused her great anxiety.

Eventually she lost her home over the hoarding issues, but it never seemed to me that she ever got any genuine pleasure from all that stuff.  I don’t think I ever saw her have a truly happy moment.  The sad thing is that she had a beautiful classic car worth thousands in her garage, but it was piled so high under the junk she could never drive it, and eventually the neglected roof collapsed on it and destroyed it.

Analyze the Packrat Situation and How Much Space it is Taking

But in this case, we are talking about a garden variety case of packrat-itis or someone who likes to collect certain items – usually related to a hobby or sentimental items.  For my husband and I, it was his model train stuff.  He and his father had worked in the railroad industry, so this was an important hobby in his life and had sentimental meaning for him as well.

Problem is he had a LOT of it and it had migrated all over the house.  A model train layout takes up about the same space as a pool table, plus storage for all the rolling stock and supplies.  And the pictures and other memorabilia he had on many shelves and walls.  It was taking up probably 20% of our available storage space and he rarely spent time doing anything with it.  He was happy just to HAVE it.

On the other hand, I had a hobby of my own and it had some money-making potential.  I had a small business selling rubber stamps and scrapbooking supplies back when that was a really popular hobby.  But my hobby had maybe 5% of our space and I didn’t have any room to make stuff or host craft nights for my customers, which would have earned more money.  Obviously, it was time for a discussion and some compromises.

Have a Respectful Discussion with the Packrat

So, how DO you deal with a situation like this?  Well, part of it is just having some honest conversations about it.  And by that, I DON’T mean fighting, or arguing about it, or criticizing their choices.  Instead, you need to find a time when you can have a respectful conversation about his wants and needs, vs. your wants and needs.  (Note to self – YOUR wants and needs are not any more important than HIS wants and needs).  Most of the time people are pretty reasonable if you come to them with a ideas on how you can be fair to both of you.

So we sat down after dinner one night to talk about the space situation.  Once I laid it out to him, he agreed (a little reluctantly) that it wasn’t a very fair situation, but he was naturally very concerned that he shouldn’t have to give up his hobby altogether.  I agreed that was fair also.  We both should be able to keep our hobbies, but could we find a way to allocate the space a little more logically?

In my case, I was able to use a little bribery.  He badly wanted a big screen TV but we didn’t have the money for one.  So we agreed that if he was willing to sell some of his train collection, he would be able to use it to buy his TV.  And I could have the space to set up a classroom for my hobby/business.  Win-win!

Implement the Packrat Solution in a Kind and Respectful Way

The important points were that I didn’t insist he give up his entire collection, I gave him the incentive of an item he really wanted, and I didn’t get all huffy and demanding.  Instead, I appealed to his sense of fairness and asked for him to work with me on creating a reasonable solution.  It’s all about compromise and reasonable concessions.  And he still had enough toys left to keep him reasonably happy.  He still has them 20 years later, and they’re still gathering dust.  Well, so are my stamps now, but at least we don’t fight about our hobbies any more.

I think that is a key point with a collector.  You respect his (or her) desire to collect these items, but you get them to agree to reasonable limits.  If they want to collect magazines, vintage sneakers, or vinyl records, they can keep as many as will fit in this area.  Or if it’s ceramic pigs or whatever, they can have enough to fill up this shelf.  They may not turn the whole house into their little hog heaven. They have to respect the fact that non-pig lovers live in the house too, and that they deserve room to display their non-pig items.

Never Throw Out the Packrat’s STUFF

It’s generally best to allow the packrat to make the “keep or toss” decisions for themselves.  The one thing you should NEVER do is try to force them into a decision by packing their stuff up and removing it without their knowledge or permission.  That is extremely disrespectful and damaging to the relationship.  How would you like it if someone came in and threw out all your most favorite clothes, or arbitrarily jettisoned half the food in your pantry?  You would be furious and would probably waste no time (or money!) in replacing it.

However, if you do find your collector is dragging their feet on the agreed upon weed-out process, then you have some passive-aggressive behavior going on.  The best way to deal with that kind of behavior is head-on.  You set a firm date (giving them a reasonable amount of time) and let them know if they don’t honor their agreement, you will carefully pack up the items yourself and move them to a storage area for further action.  You aren’t getting rid of the items permanently, but you are reclaiming the space that was agreed upon.

If the collector does request your help in organizing their treasured items, be gentle. Don’t wade into it wrinkling up your nose and making snide comments about “this old junk”.  Help them find the treasures by asking them to pick out a few items they value the most.  Then set up a place of honor to display these items.

They will appreciate the gesture and might be more willing to get rid of some of the less treasured items.  It’s a process and a delicate negotiation, so you want to give them lots of credit for any positive steps they are taking to improve the situation and deal gently with any backsliding.  It might take a while, but eventually you’ll see some breathing room opening up – ahhhh.

Organizing the Disorganized or ADHD Child

The Cleaning Styles of Men vs. Women

18 Comments on When Your Spouse is a Packrat