OK, my little Clutterbugs, Christmas is officially over – have you made plans to take down your tree and put away the rest of the Christmas clutter?  I know there are people who leave it up for months, but you don’t want to be one of those, do you? 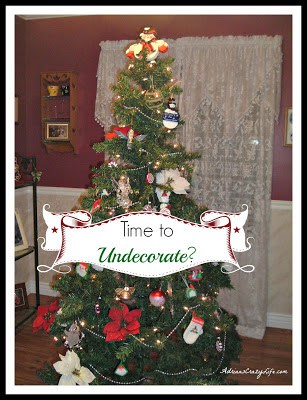 My mother was very superstitious.  She believed it was bad luck to leave the tree up into the New Year.  I’m not particularly superstitious, but it just seems like a good time to get stuff put away and get my house back in order.  Especially as I’ve been defending my favorite nativity set from my four cats for a month.  Last year they beheaded Joseph by knocking him off the mantle and it took me ten minutes to find it.

Obviously, if you were aiming for New Year’s we are a little behind schedule, but there’s no time like the present (ha! like in Christmas present!).  When it comes to putting away the decorations, there are basically two ways to do it.  You can go through the whole house and put it all away at once.  That’s my method, because I know I’ll never get back to it, if I get distracted.  OR….

If you are short on time, you can devote 15 minutes per day to clear out one room at a time.  It just depends on which method works best for your personal style.  The main thing is to make a plan and stick to it.

I think I will always remember the year we had a neighbor who had the worst case of A-D-D ever.  First, he waited until right at Christmas Eve to decorate, and then he had a big party and decorated his house up like an electric Disneyland.  I mean we are talking clear over the top in a neighborhood where people put up maybe a strand of lights, or a plastic Santa.  He had his Winter Wonderland lit up for about a week, then he left them up all through January.  And February.  And March.

He finally took them down in April, but then he only took them down halfway.  He left all those expensive decorations lying in piles around his yard clear into summer where they were probably ruined.  And the whole neighborhood was laughing at him the whole time.  My theory on that is that if you can’t be a good example, you’ll simply have to be a horrible warning!

Make a plan and let’s get those decorations cleared up.

3 Comments on Time to Undecorate Your Home?