I think there is one common thread among women and that is the fear and embarrassment of being “caught” with a messy house.  I’m not sure if we pick this up from our mothers or from TV or where.  But I think it’s a universal feeling, and it’s worse if it happens in front of another woman.  House shame is the worst type of shame.

If a repairman happens to come over and there are a few dust bunnies or some laundry lying around, it’s no big deal, but if the PTA President, or a neighbor, or a lady from church happens to drop by it is just mortifying if the house isn’t at least close to being perfect.  Or worse, my hyper-CLEAN sister!  Just kill me now…. 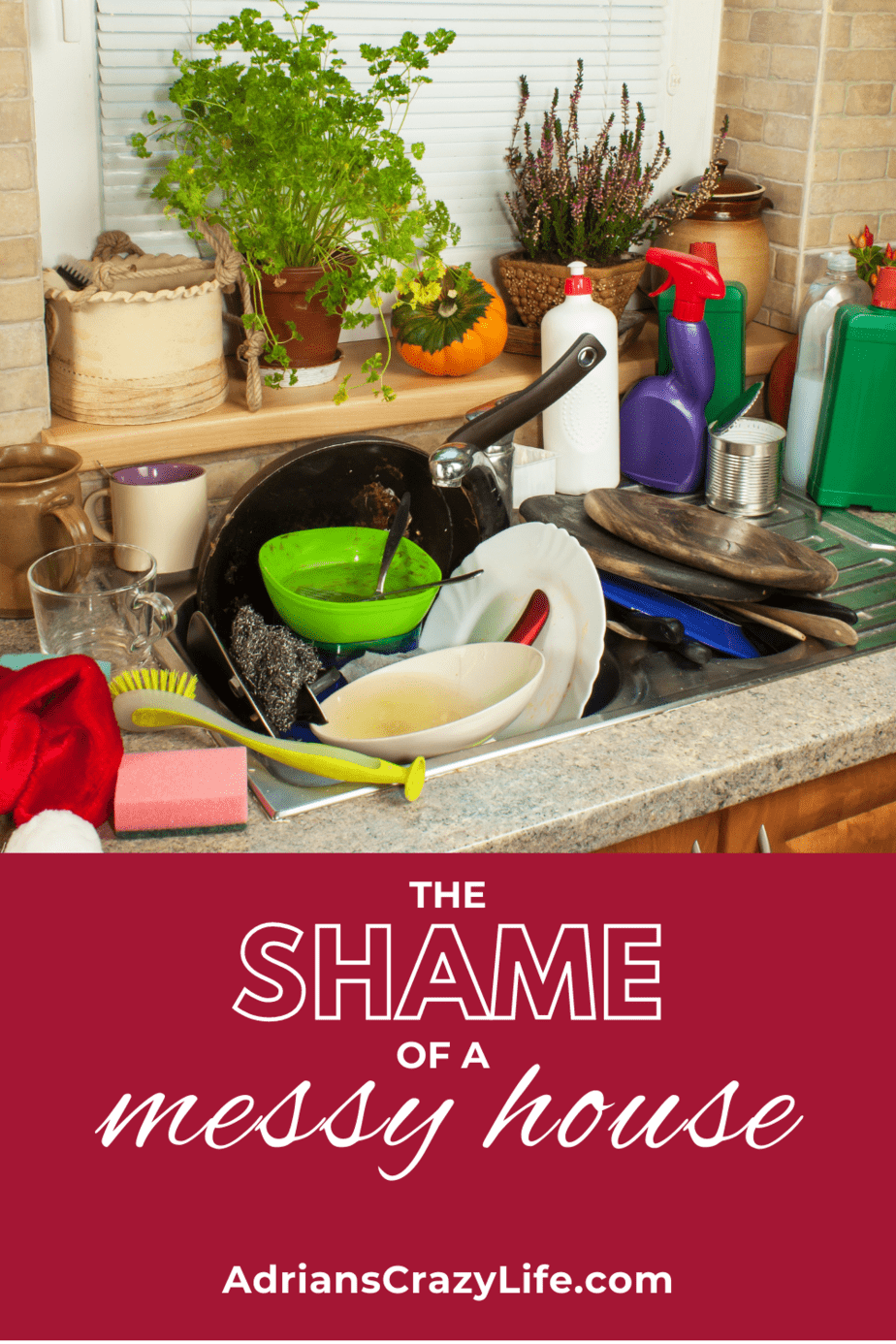 I know for many people, they will refuse to let someone in their house at all.  Flylady called that CHAOS – Can’t Have Anyone Over Syndrome.  We will stall them on the porch, or offer to meet them elsewhere, go miles out of our way to bring something to their house, or just flat refuse to answer the door – anything to avoid that awful, shameful feeling of a messy house.

Or even worse, we go into a crazy-lady panic mode and run around the house shoving things into cupboards and closets, or just closing off entire rooms.  Or apologize about every little thing – I think that is almost the worst.  I’m usually even more embarrassed if I hear a string of lame excuses come bubbling up out of my mouth.

Even though I have improved my clutter problems by a ton (literally) over the last 20 years or so, I am still intimately familiar with that feeling and I will go to great lengths to avoid being put in that situation.

In fact, one of the main reasons we purchased this house is because it has a formal living room at the front of the house that prevents you from seeing the kitchen and family rooms from the front door.  That seems like a strange reason to buy a HOUSE, doesn’t it, but that’s at least 50% of the reason we liked this house.  That’s how pervasive this feeling of house shame can be.

Can’t Have Anyone Over Feeling

I used to love to entertain – another reason we bought this house is because it has an enormous dining room that can seat about 15 people.  But, these days, almost the only people I will invite over is my close family and even then I do at least some basic tidying before they are “allowed” to come over.  I used to love having company, but I got tired of my family complaining about the crazy cleaning frenzy I go through any time there is even a hint of someone coming over.  So, I just don’t do it any more and that’s kind of sad.

What if it didn’t have to be that way?  What if we could just relax and be okay with it?  One thing that has always bugged me is that no one has ever accused a MAN of being a messy housekeeper.  That seems so unfair.  And my husband is totally oblivious to this feeling – even though I guarantee that the men living in my house are responsible for a huge portion of the mess.

If someone comes over and there are a few newspapers or some laundry on the couch, he just scoots them out of the way and asks the person to sit down – case closed.  If there are dishes on the counter, he doesn’t even notice.  He doesn’t agonize over them like I would and squirm inside that someone is seeing an unwanted or shameful side of him.  I think the messy house shame is definitely more of a female thing than a man thing.

I’ve got umpty-seven posts on this site about how to clean a messy house.  That’s what I do because it was such a source of shame in my own life, I don’t want that for you.  But we also need to learn to be kinder to one another.  We say to leave the chores and spend our time with the children, but then we give the side eye to someone who actually has a messy house from it.  I guess that’s called irony…

How to Ease Up on Yourself

I think we need to let go of the idea that having a messy house makes you a bad person.  All of the clients I’ve worked with on decluttering projects are fun, interesting, and kind people.  They have a messy house because they’re super busy or they have too many hobbies, or they’re a little ADD.  But that doesn’t make them lazy or bad people.  If you have a messy house – own it.  Admit that housework is boring and you’ve got other ways to spend your time.  That’s a perfectly valid choice and people who are genuine friends won’t care.

It’s kind of like those people who get up at 5:30 on the dot every morning.  That’s a great choice, but it doesn’t make you superior to people who like to sleep in.  I’m one of those – I’m super productive at night (I’m writing this at midnight, for example).  But I’d be a totally sleep-deprived zombie if I forced myself to get up at 5:30.  Different strokes.

Women with beautifully spotless homes work hard.  So do women with messy homes.  They just work at different things.  I worked a 40 hour workweek and ran a business, while raising three kids.  I would’ve been completely exhausted if I’d tried to throw a spotless home into that mix also.  So why feel guilty.  Like it says in the song – Let it go….

Changing the 50’s Thinking About a Messy Home

But I’m starting to think that we need to change our outdated thinking.  This isn’t the 50’s any more and not everyone has the time, the energy, or the ability to keep their homes perfectly clean and uncluttered.  Let’s stop shaming other women and thinking badly about them if their houses aren’t fabulous.

Even if you never say one word, it clearly shows in your body language, and she will know that you are silently judging her.  Instead give her a little grace and compassion.  Now if it’s “call the health department” messy or hoarder level, that’s a whole different ball game, but I’m talking more everyday clutter.  Sometimes just knowing how to organize a messy house can help a lot.  A lot of the problem is just TOO MUCH STUFF for any sane person to manage and not having good systems to handle it.

I think it’s kind of like those uber-skinny, gorgeous model-types who still think they have fat elbows or a big nose.  We are just unrealistic perfectionists sometimes.  I think it’s almost part of our DNA.  My advice is to just let it go and embrace the mess.  Be OK with it.

Your kids haven’t died of some exotic tropical disease, your husband can still find the remote control, and the dog is having a great time licking up the crumbs off the floor.  Just let it be and work on enjoying your life.  And I’m going to try that too – but just in case, can you give me a 15 minute warning call before you drop by?  Old habits die hard….

What works for you on avoiding house shame?

Here are some other posts you might find helpful:

7 Ways to Make Your House SELF CLEANING

Are You Making these Cleaning Mistakes?

Cut your Cleaning Time in HALF

18 Comments on The SHAME of A Messy House