If there’s one thing I’ve noticed, it’s that most people do not know how to make an effective complaint.  I’m actually really good at doing that.  I actually used to write formal complaint letters for people on Fiverr. So, here’s a situation I experienced recently that ended in a refund of several hundred dollars.

As I mentioned recently, my son got married. It was a very nice wedding, but there were several glitches that marred the day.  There were enough small problems that we ended up making a formal complaint to the reception company.  Which actually worked quite nicely.

It was kind of ironic because my daughter-in-law and I were both VERY organized about this and make sure we had all our ducks in a row.  I’ll explain why that was funny – she had wanted little bride and groom rubber duckies floating in a shallow bowl of water as part of the centerpieces.  See?  It was a super cute idea, however, we neglected to give the little duckies a TEST FLOAT prior to the wedding day.

You should have seen us.  Literally, five minutes before the ceremony was due to start, my best friend, my husband and I were all frantically running around putting the rubber duckies in the centerpieces and cursing at them when they kept going belly up! About half of them were too top-heavy and kept flipping over, so we had to figure out which ones weren’t working and scoop them out to only use half the ducks.  Wedding day CRAZINESS!

That particular item was NOT the reception hall’s fault, but it kept me distracted enough to not notice some of the other issues, such as some of the decorations were missing (ironically the Bride and Groom’s table had no decor at all #weird), the entryway floor was filthy, and the candles were not lit until halfway through reception.  They also didn’t have champagne flutes for the toast.  Um, it’s a wedding venue – how would you not have the right glasses on hand?

Surprisingly, it was the professionals rather than the amateurs who messed everything up.  That was kind of bizarre because I hadn’t done a wedding in 30 years and they do a dozens of them each week!  But our coordinator just seemed to have an off day.  It definitely marred their once-in-a-lifetime day. And that’s just sad because you don’t ever get a do-over on your one and only (hopefully!) wedding day.

Afterward, we all compared notes. Because of the hectic nature of the day, there were some things that the bride and groom hadn’t noticed and others that I hadn’t noticed, so it helped to compare notes.  This raised the total to almost a dozen different flubs. We debated what to do about it – was there any point to make a complaint since there wasn’t any way to fix anything after the wedding was over?

Ultimately, we decided to at least let them know about the problems – if only for the sake of future brides, so that maybe they wouldn’t experience the same issues that we had.  So, while the kids were off on their honeymoon, I drafted a very specific and polite complaint Email detailing our disappointment with their service.

Here is the formula for a proper complaint letter: 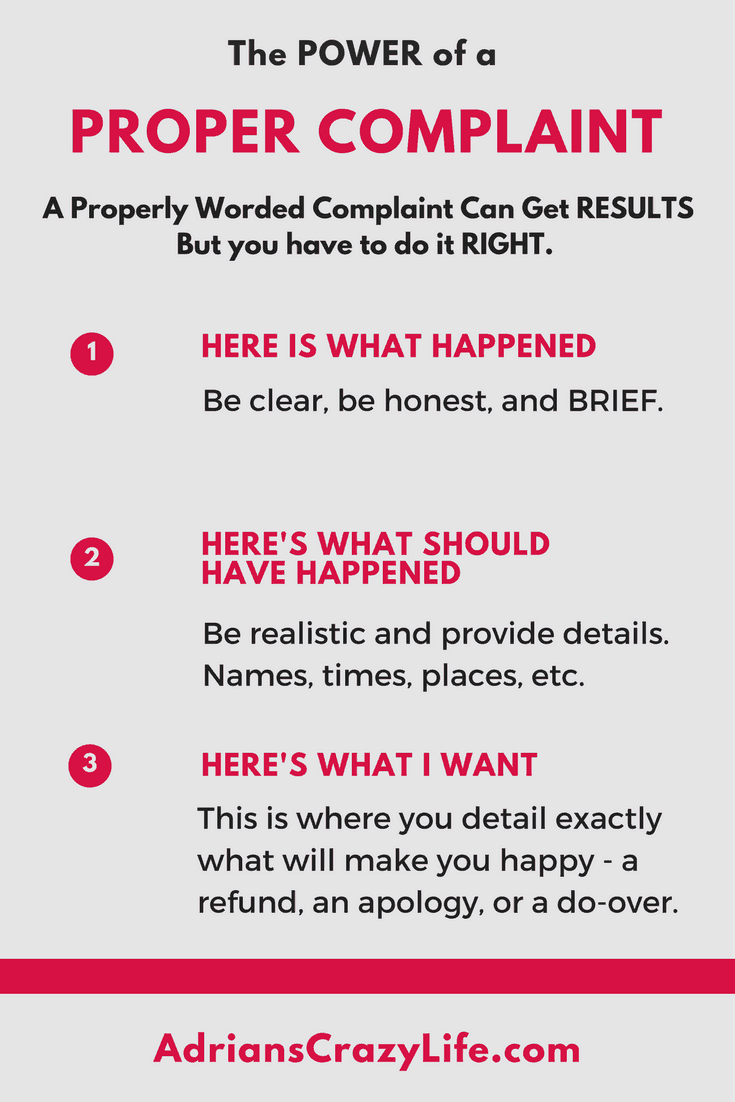 At that point, I wasn’t really thinking about money. I’d paid for the reception center as my contribution to the wedding and I counted it as money well spent.  But I did suggest that they personally apologize to the bride and groom.  AND that they might also want to consider a financial adjustment. I kept the tone of the letter friendly and professional – offering them more as suggestions for improvement rather than accusations or criticisms.

Within hours of sending the Email, I had a VERY apologetic phone call from the Manager.  The person in charge had been one of her most experienced people, but she’d just had an off day, and both of them felt terrible for ruining the reception. Also, some of the complaints about the facility were items she’d been asking the owner to fix for a while.  She intended to show my letter to him to confirm her argument for getting some of the changes done.

She also agreed to contact my son and daughter-in-law to apologize.  They voluntarily offered to refund 20% of our hall rental fee, which I gratefully accepted. They even agreed to return a cake plate that we had left behind.  That saved me an hour-long drive to get it back to the bakery lady. All because I took the time and energy to write a good complaint letter.

I think most businesses are that way. They want happy customers and good referrals. Because they know if they displease people, they aren’t going to get a lot of new customers. So, especially if you keep your complaint polite and helpful and NOT go all Bridezilla on them, that’s going to make them more cooperative.  They are going to do their best to keep you happy. 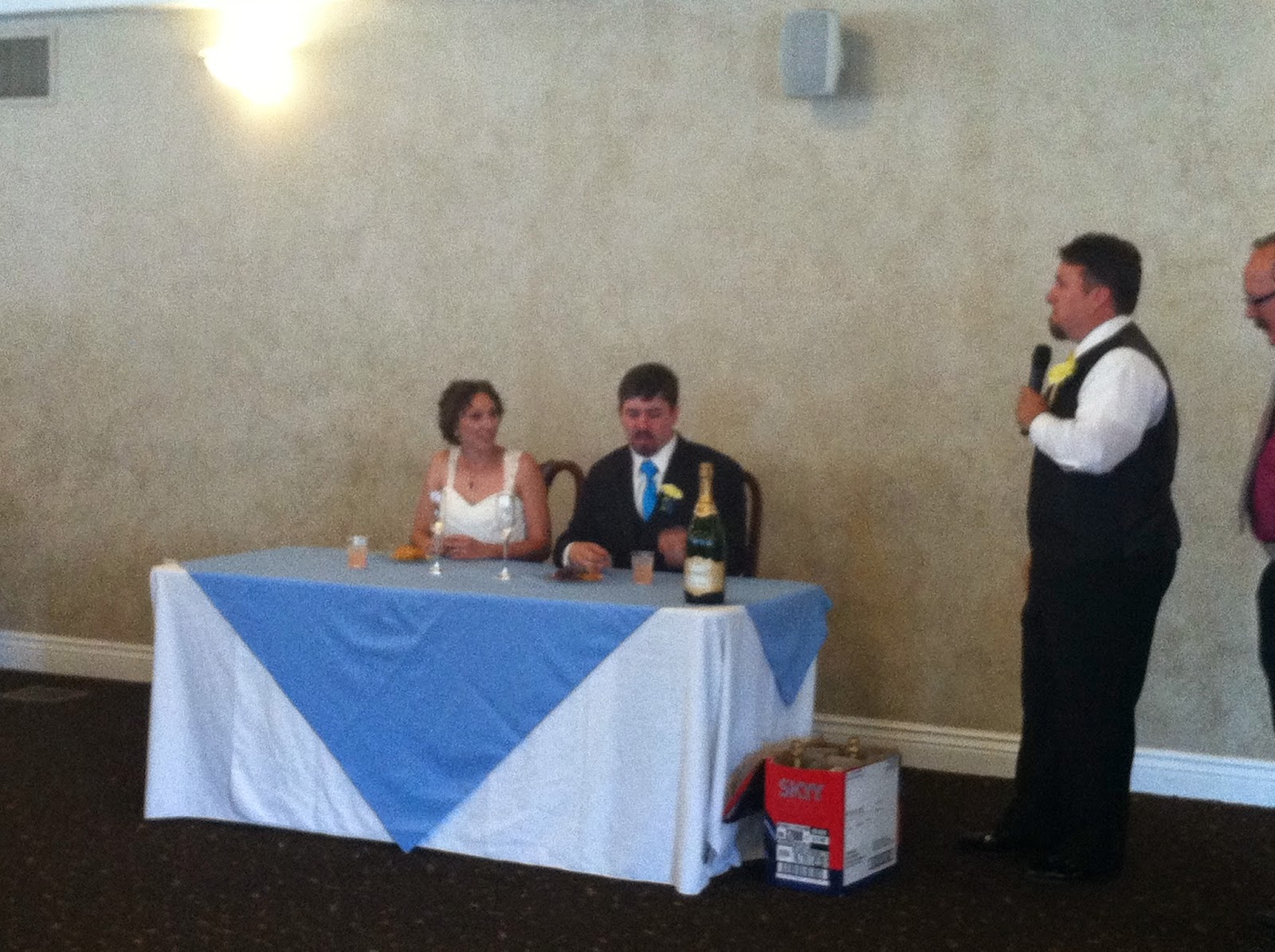 You can see several of the problems right here. The bride and groom’s table, no centerpiece or decorations. Apparently, they ran out of centerpieces (even though we had only about 8 tables).  So of course, they skipped the most important table in the room – instead of one way back in the corner! #headscratcher

You’ll also notice the cardboard box on the floor. When it was toast time, the wedding coordinator inexplicably just brought out the box of champagne bottles and set it on the floor, even though we had paid an extra fee for the champagne toast. No glasses or anything – just a tacky cardboard box of unopened bottles.

I have no idea what she was expecting.  But the best man (my oldest son) was so nervous, he just started doing the toast.  Even though not a soul in the room – including his brother and new wife, had a glass in their hand. So we had to stop and completely redo the toast.  After a wild goose chase to even find the glasses.  They couldn’t find any champagne flutes, so we had to settle for wine glasses to pour the champagne and sparkling cider. It was just so WEIRD and very awkward!

They also messed up the timing of their leaving celebration, so they were left standing upstairs by themselves while everyone was down there waiting with sparklers going to send them off.  By the time they realized it was time to move, all the sparklers had burned out!  Just silly, lame stuff like that all day long…

The good news is – at the end of the day, they’re married.  And that’s what really counts. And we will have some funny stories to tell about their wedding – which will seem a lot funnier several years down the road.

In the end, Mom had enough money to get herself a new laptop with the refund money. I guess we’ll call it a happy ending all around!  I guess it really helps to formulate a complaint letter to really communicate your issues and your expectations.