Raising teens and tweens can be quite a challenge. What’s that saying? It’s like being pecked to death by a duck. As the mother of three sons – two adult and one still in those “fabulous” teen years, I can certainly testify to the truth of that.  What if there was one magic truth that you needed to know about teens?

If it would help you understand the whole teen/tween psyche, do you think that would help? I do know one such secret and I’d be happy to share it with you – – – for a million dollars.

How ’bout a thousand dollars?

OK, you drive a hard bargain – here it is for free:

Every teen’s biggest desire in life is simply to get through the day without being embarrassed.

That’s it. That’s the entire secret of teenage life.  If they can get through a day without being embarrassed by their friends, their teachers, their parents, or their pesky little sister – it’s a been good day. 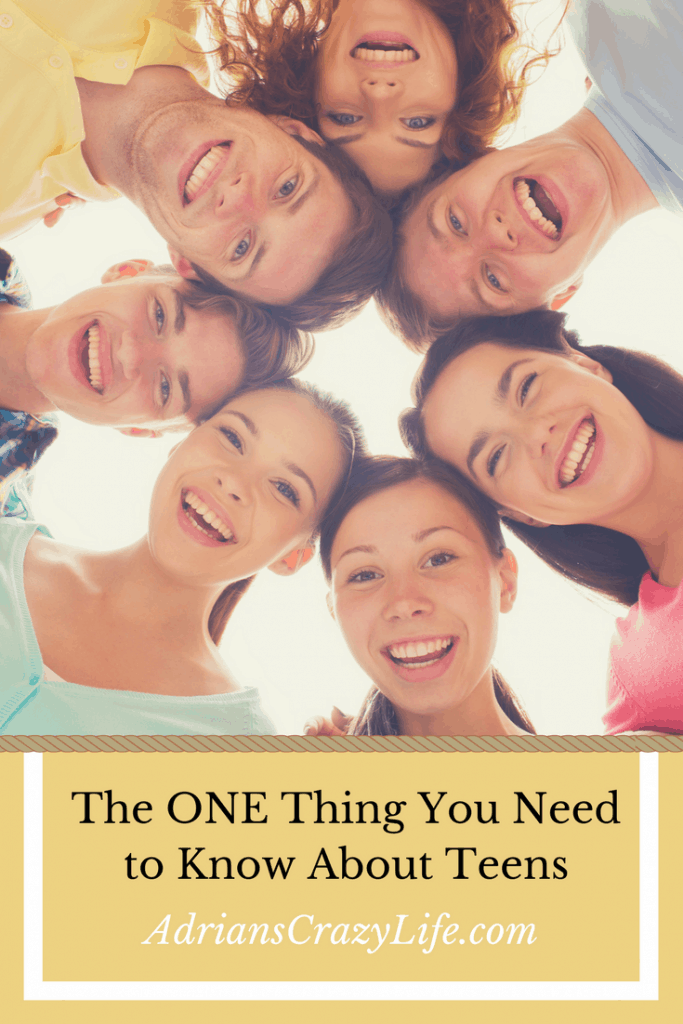 We’ve all been there in our own teenage years. When you are that age, everything is embarrassing to you. Your body is changing, your hormones and emotions are driving you insane, and you are always insecure about where you stand on the popularity scale.  That’s huge for adults, let alone kids.

This is why teens dress alike, listen to the same music, and hang around in a crowd.  They are terrified of being singled out and embarrassed.  Ever.  That’s also why they ask us to drop them off a block away from school.  And why they pretend they don’t know you if their friends are around.  You might show up in stained sweats and no makeup, say something weird.  Or God forbid – criticize them and take away their cool points.

You might even be a little bit bald or overweight or have funky looking hair – not like their friends glamorous parents.  I remember at parent-teacher conferences in Jr High, one Mom showed up with flaming pink hair, skin-tight jeans and a sexy belly shirt.  Her poor daughter was about to expire from humiliation.  I’m all for free expression, but embarrassing your kids that way is just sad.

This isn’t just a desire or a whim of theirs, it is a primary need of theirs.

So, if you know that, how can you help them get through the day? Well, obviously just awareness is a big help. If you know what is behind some of their odd and contrary behavior, it might help you to be a little more understanding.

Here are a few more tips that might help:

Having the “right” clothing is enormously important for these kids. Nothing can cause you to become uncool faster than having a dorky looking outfit.

So help out as much as you can in this area. Don’t buy them clothes unless you are very confident in your choices.  Or unless you get advice from another teen. I used to have my older boys act as “personal stylists” for the younger ones to be sure they were dressed appropriately and had their hair flipped “right”.

I’m one of the few moms I know who can buy clothes for my boys.  I’ve been raising boys for almost 30 years, so I have a pretty good feel for what they like. But if something isn’t right, I don’t take offense.

It isn’t because THEY don’t like your choice, it’s because they think their FRIENDS won’t like it. If that happens, just let them trade it in for something more in their style.

And don’t pester them about wearing a coat, gloves, or snow boots. The average teen would rather freeze to death than wear something uncool. Let them own that lesson. After a few times of being uncomfortable, they will make the adjustment. Or maybe they won’t and that’s OK. Pick your battles.

If your budget won’t allow for the clothes they want (need!), help them find ways to earn money, or help them find bargains at discount stores or the cooler consignment shops. Consider letting them have fewer name brand items they WILL wear rather than drawers of WalMart crap they won’t touch.

Don’t hover and don’t criticize them in public. The teen years are a time of kids developing their independence while still living at home and requiring your supervision and protection (as well as your credit card!).

Be a little understanding if they don’t want to sit with you at a school function.  Or if they don’t want to give you a high five after scoring a winning run. If you do need to reprimand them about something, try to do it discreetly – maybe even with a text message, rather than argue in front of their friends.

Be “cool” with their friends – be friendly and lighthearted, but don’t ask pointed questions and try not to appear critical of their appearance, clothing, or personality.

Give them a little space, but maintain a presence. My youngest son is dating now and I can see his anxiety level rise every time he brings a new girl home.  So I try to be extra low-key in those situations and so far I think I’ve passed the test. Still, I make a point to walk through the room every so often with a load of laundry or an offer of popcorn. And I make it a firm rule to keep the doors open and the lights on if they are watching a movie or playing video games. Can’t be too careful with hormone-charged teens.

Tread lightly in conflict situations regarding your teen. It is tempting sometimes to want to tell off a teacher you think is being too strict, or call another parent in a bullying situation, but sometimes that just makes it worse. If your teen genuinely can’t resolve the situation, come in with soft words and an attitude of “how can we resolve this issue together” instead of “you jerk, you upset my kid”.

When the inevitable happens and your kid does have an embarrassing incident – take it seriously and be sympathetic. Pick up on their legitimate feelings of distress and respond with a kind gesture – ice cream, a movie, or just a sympathetic ear. It will mean a lot to them.

Refrain from I told you so’s and other criticisms. Try not to jump in with a “fix it plan”. Instead ask them what they think their options are and how they would like to handle the situation. Remind them that teenage dramas are fleeting and that next week, someone else will be the center of attention.

See – now wasn’t that worth a million dollars?