As a finance blogger and a Scout leader, I am passionate about teaching young people about money.  To me, it isn’t just a one-shot deal.  It is a string of opportunities to both teach them and show them some easy ways to manage their money.  It’s not just being thrifty, though that’s part of it.  I’m also teaching them to use credit wisely, pay bills on time, make good choices, etc.

I am starting to get those tiny glimmers that my boys are finally “getting it”.  Yesterday, I got a text from my 16-year-old son, during the school day.  Naturally, my first thought was what does he want NOW?  Permission slip signed? Money for something? A ride to some school activity?  No.

He was texting me to tell me that his school bus had gone past a gas station.  He’d noticed an unusually low price on gas.  I was completely FLOORED.  This is a kid who doesn’t even drive yet and he is paying attention to the price of gas!!  That is flat-out AWESOME! 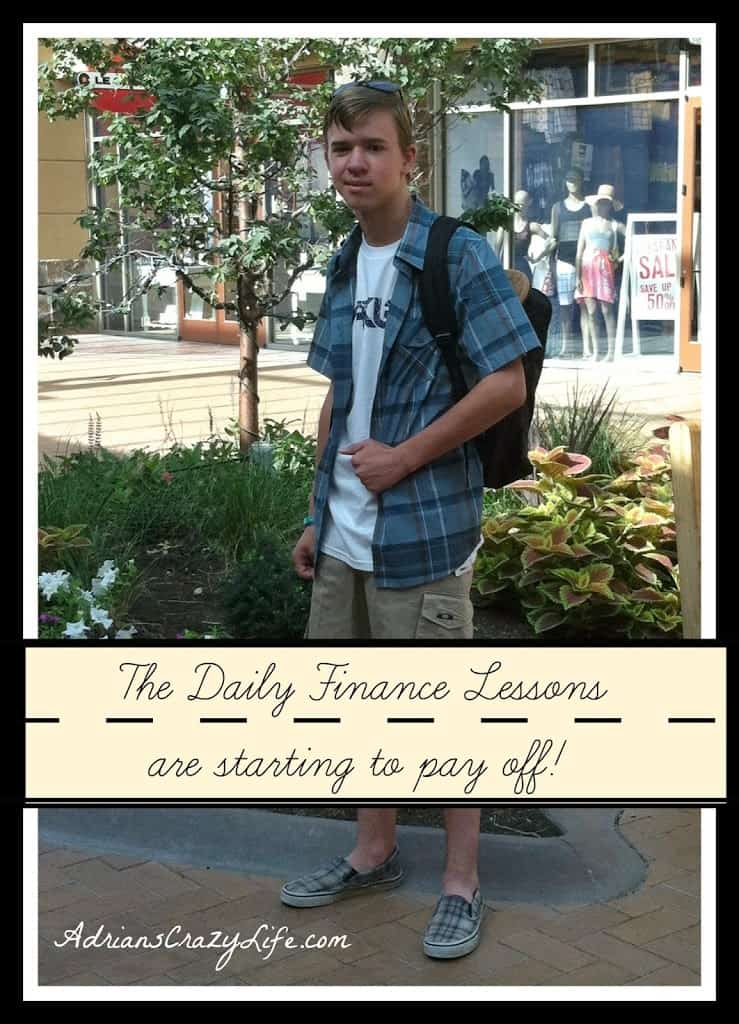 My older sons and their wives are in on it too.  They frequently share great bargains they’ve found, or talk about promotions they are angling for.  I make a big deal about it (I think that’s why they TELL me!).  Most people are more impressed with someone who gets a good deal and is smart about their money, then someone who has expensive stuff.

I think that comes in through in every conversation with my kids or my Scouts.  I can honestly admire that quality in them and encourage it.  OK, it’s mainly because I don’t want them sleeping on my couch, eating potato chips when they are 40!  But still, I do get really impressed with them.

And not just with my own kids.  We were giving my son’s friend Bailey a ride the other day.  He was talking about some fancy gaming laptop he wanted to buy.  I was like – honey, why would you even want to do that?  When I told him, he could buy TWO regular laptops for that same price, he was surprised.  I mentioned that he could do some price comparing on Amazon or Ebay or look at a model that is a year or two older. When we dropped him off, he was really thoughtful.  I don’t know if anyone had ever had a conversation like that with him before.

Same thing with my Scouts.  Family Life and Personal Management are two merit badges I teach.  They each have a big financial component.  We have good discussions about their choices in life and I also share a lot of stories with them about things I’ve done with my own finances – both good and bad.  I think kids really need to have people like that in their lives and so many kids just don’t have that example.

Our pastor has an interesting theory – he says to preach the gospel to everyone you meet and to even use words if you must.  That’s how I approach finances.  My kids are learning by example every single day.  I use them as my human calculators in the grocery store or at the Mall – quick, what’s 25% off that price?  Which one of these cereals is a better deal?

My kids all they know better than to ASK me for money.  I see other Moms handing out $5 and $10 bills like a human Pez dispenser.  That doesn’t fly around here.  If you want something that isn’t just food, shelter, or other basic necessity, you’d better have a plan in your pocket for how you are going to work for it, save for it, or share the cost on it.  That’s just a no-brainer for us.  Even the Scout Jamboree last year – I think he was the only boy who had to earn $500 of his nearly $3,000 fee for it.  He hated doing all that work, but he knew that I wouldn’t hesitate to pull the plug if he didn’t hold up his end of the deal.

I think most parents do the same basic things – save/spend/charity, work for your allowance, save for college, etc.  But are we all doing enough?  What else can we do?  Even if it requires using words….