Here’s a news flash: men are different than women.  Shocking isn’t it? But it’s sort of a basic fact of biology.  And we have totally different cleaning styles.  So, the illogic of it is why do we expect men to clean like women do or vice versa?  There have been whole books on the subject – the whole Men are from Mars, Women are from Venus series, for example.
I have this conversation with my husband all the time.  When he complains about my shoes, or the length of my showers, or my overly frequently bathroom breaks, I remind him (yet again!) that these are the realities of living with a woman.  If he wanted someone with 3 pairs of shoes who takes 5 minute showers, and only visits the powder room twice a day, he should have married a MAN!

Why Do Cleaning Styles Matter?

Well, the problem is that these to very different types of people are trying to coexist in the exact same home.  And that can be frustrating.  The top three things that couples fight about are:

Somehow these couples have to come to some kind of a compromise about the housework and come to some kind of agreement about their cleaning styles.  One thing that needs to happen is that you have to give your partner permission to NOT BE YOU.  People get locked into having a RIGHT way to do something, but your partner has his or her own RIGHT way to do the same thing.  Which may include NOT feeling like that particular chore needs to be done….

It’s kind of silly, isn’t it?  But we do the same thing when we expect a man to care about towels on the floor, or a few dishes in the sink, or whatever it is we’re yelling at him about today.  It really isn’t fair to expect him to take these things as seriously as we do.  They simply aren’t designed for that – well, MOST of them aren’t.  There are some men who are total sticklers for housework, but I think they typically fall into the “less concerned” model. 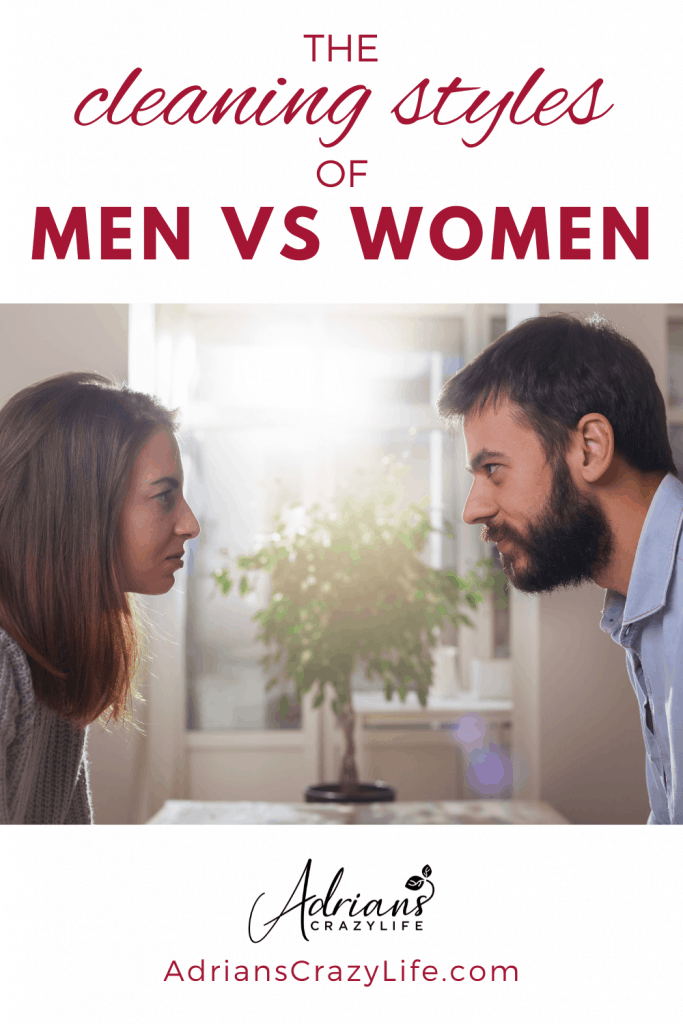 But when we were growing up as little girls, we were bombarded with information about the importance of keeping a neat house, and nurturing our families.  Little girls play wedding, and play house in their little Barbie dreamhouse, or whatever, but boys, not so much.  Their role models are completely different and have a different focus.

If they do make an effort to clean, it’s typically either to keep the peace with us, or because their Mothers somehow managed to drill a few simple routines in them.  But then when they slip up, and they invariably will, and we start shrieking like a banshee, it just freaks them out, and makes them not want to be around us.  I’ve experienced this one first hand.  I get into a certain mode, especially when we are expecting company and my family seriously dislikes me when I get like that, so I try really hard not to be like that.

And that’s the problem – having a hissy fit does get you temporary compliance, but at the cost of damaging the relationship.  So that’s not really a great tactic.  Instead, you might try a calm and assertive discussion about what needs to be done every week and appealing to his sense of fairness might be a better approach.  But in the long run, you have to realize that mopping the floors or putting away the laundry, just may not hit his radar.

And there are some ways that works in reverse.  My husband will fix something on the car and then he’ll ask me if it worked better.  And he gets frustrated when I just give him a blank stare.  As long as the car doesn’t stall in the street, I’m not going to notice that it’s stopped pulling to the left or whatever.  Not on my radar…

So, what to do about it?  I think part of it is just having an awareness of the difference in cleaning styles.  He isn’t doing these things to make you crazy or because he doesn’t care about you, he’s doing it just because he’s a guy.  The other thing to do is to explain to him why it’s important to you.  He still probably isn’t going to care about whether the dishes get put away, or the towels get folded a certain way, but if he feels appreciated and sees that his help makes you happy, that’s going to go a long ways towards insuring a little compliance from him.

This is where you have to set aside your perfectionist tendencies.  The first time you criticize his help, or go behind him and redo it, you’ve lost him.  If he’s going to help, he’s going to want to help HIS way and it might not be as clean as YOUR way.  You have to decide – perfection or doing it imperfectly as a team.  But if you insist on the perfection, don’t complain if you’re exhausted and feeling unsupported.  Check out my post on how your perfectionism hurts your family.

Give it a try – allowing for different cleaning styles might make you happier as well.  All that yelling is hard on your nerves also!

Listing Your House for Sale When It’s Messy

How to Make Money from Your Excessive Clutter

1 Comment on The Cleaning Styles of Men vs. Women