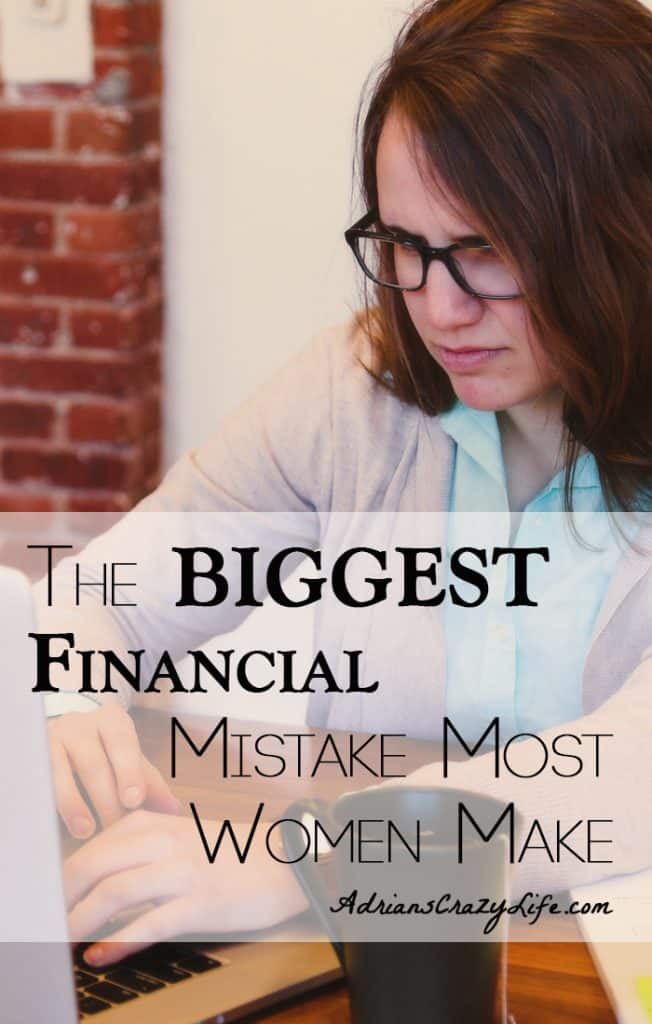 I’m going to clue you in on the biggest mistake many women make in their financial lives. They depend on other people – typically their husbands or partners, but sometimes their parents also, to keep them financially safe.  We can’t help it – we are trusting people, and we like the thought that someone else is going to take care of us and we won’t have to worry about money ever again.  It’s a nice fairy tale, but many times, that’s exactly what it is.
I understand why we do that, I totally do, but I also get why that can bite you in the butt. Husbands might leave, or they die, or they could even become disabled and unable to provide for you and most importantly, your children. Parents die or become disabled, and sometimes are dependent upon YOU for their care. Have you checked the prices on nursing homes lately? It would scare the socks off of you.

In the event you do get divorced, did you know that a whopping 25%-40% of dads never pay a dime of child support, despite a court order? Not to wish anything bad on anyone, but if your husband announced he was leaving tomorrow to run off with his secretary or whatever, would you have enough assets under your own control to be able to support your family until child support or other arrangements could be set up?

This is Definitely the Biggest Financial Mistake Women Make – Retirement

What about retirement? If you’ve been married for a certain period of time, I believe you are entitled to 50% of any 401K’s or other retirement assets, but would that be enough? If you work, do you have your own 401K or Roth IRA set up? You really should, but a lot of women rationalize that they “don’t make enough”, or that their income needs to go for college or other expenses. That’s why such a high percentage of women retire in poverty in this country. We’re women and so we give and give to others our whole lives without taking consideration for what we might need for ourselves. But that poverty word, that sure doesn’t sound like a lot of fun, does it?

There are college loans, home improvement loans, car loans, and every other kind of loan, but the one loan they haven’t invented yet is a retirement loan. And statistically, that is the point in your life where your husband is much more likely to die before you will, so you may end up on your own. That is also the point where you are most likely to have health problems of your own and be unable to work. By then, your parents are likely to be gone, or in difficult straights of their own, so who is going to take care of you? Maybe your children, but you wouldn’t want that for them, and they are likely to be struggling to provide for their own families.

What is the message here? Well, for starters, think ahead and change your thinking. Don’t plan on always having your husband or your parents as a safety net. I’ve been lucky to have never been divorced, but I have lost both my parents and in-laws, so I’m learning how to live without the safety net and provide for my own security. I know I need to be prepared for that proverbial rainy day, and I’m working hard on it.

I save significant amounts of money out of every paycheck and I’ve had my own 401K since I was about 30 and I think I had an IRA even before that. We’ve both received small inheritances from our parents and I made sure that my portion is set up in a separate account under my own name. I’m not planning to get divorced, but just in case, that portion would not be considered joint property. Does that sound cold and calculating? Maybe, but that point was brought home to me very early on by my parents.

When I turned 21, I was living with a loser boyfriend. You know the type, couldn’t keep a job, sponged off his parents (and mine!), bought everything he could get approved for and then never paid the bills. I don’t know what I saw in him and fortunately, I broke up with him soon after, but my Mom, bless her heart, was looking out for me. She had my Dad give me $2,100 for my 21st birthday with specific instructions to keep that as a separate and secret emergency fund in case I ever decided to leave Mr. Loser. She wanted me to always have a little stash of cash for a rainy day. I held on to that account for years and years until my husband and I finally did have that rainy day when we were both unemployed and broker than broke and I was so happy to have that cushion available.  I think it’s just smart for a woman to have a little stash of her own for some kind of emergencies.

Even if you don’t work, it’s time to have a frank talk with your husband about emergency funds, savings plans, life insurance, and retirement accounts. He may not appreciate your nosing about in “his” money, but there may come a day when you’ll be glad you did.

10 Secrets of Women Who Always Have Money