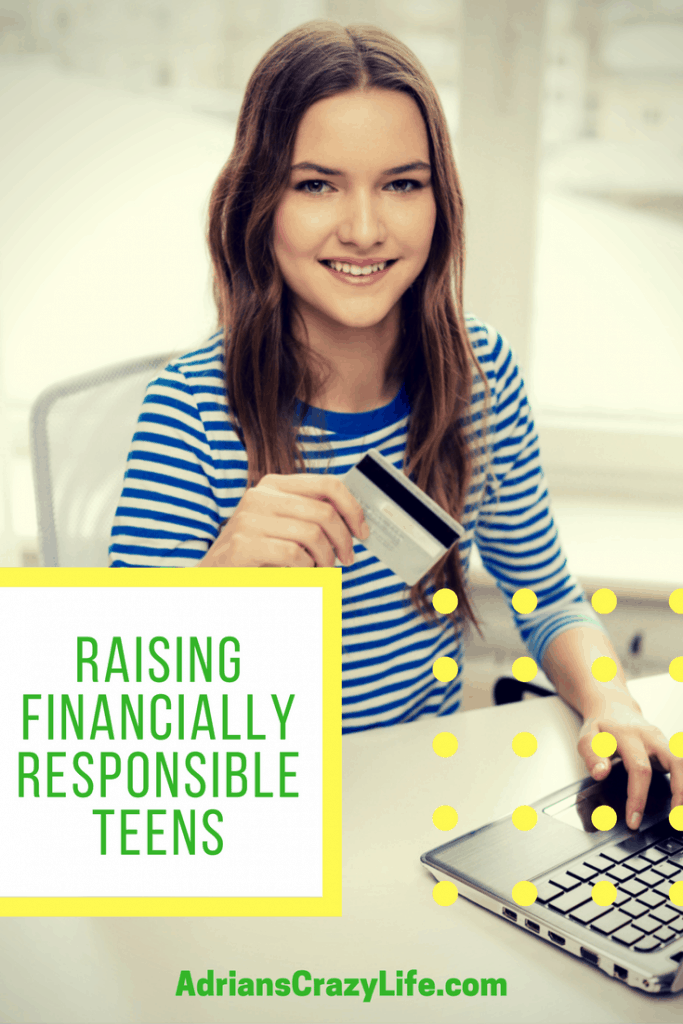 This is a sensitive subject for every family.  I think every family handles money slightly differently with their teens. But on the other hand, I think it is something we all need to get a handle on if you are raising teens.

I have a great quote that I think sums up my philosophy of kids and money.

Honestly, I think that’s the biggest mistake many parents make – making money too easy for their kids. That doesn’t really mirror life, does it? As an adult, I don’t usually have people handing me money or buying me the things that I want. And I even have to work for a living – shocking!

I think the biggest part of our job as parents is to prepare our kids to be successful in their adult lives. So, you want your money philosophy for your kids to be geared towards that goal, right?

When my kids point out something they want or somewhere they want to go.  They know exactly what answer they are going to be hearing from me – “So, how are you going to pay for that?” And they know there is likely going to be some big-time chores or some scrimping and saving in their future before that item is going to belong to them.

For instance, my Scout son wanted to go to the Scout Jamboree last summer. Price tag $3,000 (wince). I thought about it for literally months before I decided to let him go. It is a once-in-a-lifetime experience and I wanted him to be able to enjoy it.

Now obviously, a 15-year-old kid wasn’t going to be able to earn that whole fee within a year. I could barely swing it myself and I had to make a lot of little payments over a year! But I made sure he was going to have to cover at least a portion of it – $500 to be exact. He had to help his Dad mow lawns during the summer, sell Scout-o-Rama tickets all over town.  He’s still selling Dominoes pizza cards to everyone we know (want to buy some?). He hated it and I had to push, push, push him every step of the way, but he understood that he wasn’t getting on that plane to the Jamboree without paying his share of the money.  Ain’t gonna happen pal.

He had to help his Dad mow lawns during the summer, sell Scout-o-Rama tickets all over town.  He’s still selling Dominoes pizza cards to everyone we know (want to buy some?). He hated it and I had to push, push, push him every step of the way.  But he understood that he wasn’t getting on that plane to the Jamboree without paying his share.  Ain’t gonna happen pal.

Then, last Fall, his Xbox broke. Not his fault and I felt really sorry for him.  The thing just wore out after about 5 years of use. It was SO tempting to buy him a new one for Christmas, but I held firm. He’s going to have to save up to either get it repaired or buy a new one. I may help him a bit, because that’s a big chunk of money for a kid that age to come up with.  But he’ll definitely appreciate it all the more when he finally does get it.

I think my biggest fear is to have a 30-year-old unemployed kid still living in my house and expecting me to finance his life for him. I’ve seen so many of my friends struggling with their overly entitled adult children just sucking them dry.

I just can’t face that possibility, so I think that’s why I’ve led my three boys down the path to self-sufficiency. It hasn’t always made me the most popular Mom in town.  But in time, I hope they will appreciate the lesson. Like the old saying says, there are no free lunches, kids. Not in this house anyway.

PS:  I should mention that my two adult sons seem to have learned this lesson very well.  Most kids this age do a LOT of business at the “Bank of Mom & Dad”, but I can’t really think of a time when either of mine has asked me to help them out financially.  Yay!