Kids are scary.  They get plenty of bumps and bruises just from their normal activities, but then they start in on the daredevil stuff.  It’s a wonder any of them survive their childhoods without major injuries or worse! 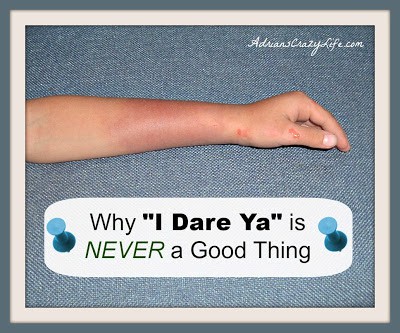 Considering we have 3 sons, we’ve been really lucky as far as injuries go, but when my youngest son was about ten, he did something really dumb.  He took a dare from a kid at a pool party.  The kid dared him to stick his arm in the pool filter, and of course, he did.  Those things have tremendous suction and there have been some serious injuries with them, but fortunately, there were some alert adults watching the kids and they were able to get him out of there before he seriously messed up his arm or got sucked under the water.  I shudder to think what could have happened otherwise.

As you can see though, his arm was one solid bruise from wrist to elbow.  He had to go to the ER for Xrays and a course of antibiotics for the nasty germs contained in those filters.  And his arm was pretty sore for about a week.  After that, we had a serious talk about dares.

When you think about it psychologically, dares are really interesting.  Kid A (or even Adult A) comes up with something so astoundingly stupid they know that no one in their right mind would do it.  But it would be entertaining to see someone try it, so they “dare” Kid B to do it.  Most of the time, Kid B rightfully tells him to stuff it, but if Kid B has low self-esteem or has a naturally daring or clownish personality, he is likely to take the dare just for the attention factor.  This could end in serious injury or major property damage.

I think we need to really talk to our kids about situations like this and help them understand why someone they consider a friend would do something that could cause them to get hurt.  The phrase I used with my son is that nothing good is ever going to come after “I dare you”.  I think that made an impression on him because as far as I know, he never took another dare again.

You might even want to role play it with them to help them come up with several good responses to a dare situation.  It doesn’t mean that they will always come out of it without taking the dare, but it certainly makes it less likely.  I figure if it keeps them out of the ER even once, that is definitely time well spent!

3 Comments on Parenting: Why “I Dare Ya” Is NEVER a Good Idea