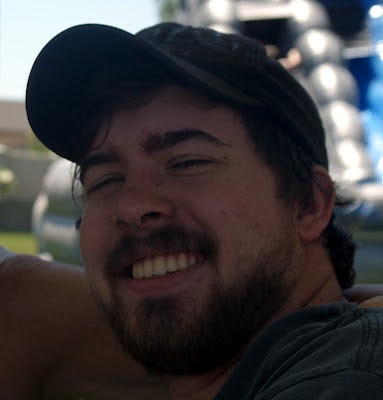 This post was inspired by a mistake made a while back by my now 25 year old son. This son, in fact.

Yes, I know he’s a handsome fellow, but he’s not quite perfect. Like a lot of kids (okay, young adults!), he makes mistakes sometimes, especially regarding money.

His latest mistake concerned a guitar.  Actually, it concerned another guitar.  I think he has four or five of them.  Honestly, I stopped counting a while back. I thought I saw a new one floating around in his room, but he convinced me that it was an old one.  Until I saw the bill…. The past due bill.  For $500.  Ooops!

Sure enough, I got the story out of him.  He had bought it on a 12 months same-as-cash deal.  He had great intentions of paying it off, but of course that never happened.  The sad thing is that he was living at home with us then and had plenty of money to have paid it off during that time. Now he has an apartment and a girlfriend, so it will be much harder for him to get it paid it off.

Plus he’s accrued a whopping $50-$75 in interest fees on the darn thing as a result of not working the 12 month same-as-cash deal properly.  Dave Ramsay calls that a Stupid Tax, which I think is a great name for it.

Now let’s back up and see how he could have done this better.  It doesn’t matter whether it’s 90 days same-as-cash, six months same-as-cash, or one year = no interest.  It’s all the same basic concept.  You buy a large ticket item – like a guitar and the store very kindly allows you an waiting period with no interest charges.  Usually you have to make some kind of payments, but some plans don’t require any payments with approved credit.

For most people, that seems like a very attractive deal, and it can be a terrific bargain IF you work it right. Obviously, in this case, Mama’s little darling did NOT work it right.  The big “gotcha” angle they are counting on is that you won’t have 100% of the charges paid by the ending date.  When that happens, they rub their greedy little hands with glee and they sock you with a whopping interest charge on the whole amount – typically 25% or more.  Then they continue to charge you that huge interest charge until you get the whole balance paid off.  Nice of them, isn’t it?

Now, let’s see how to legitimately “hack” the plan so that YOU come out ahead and not THEM.

Step one: – can you afford the item?

That’s a big question because these deals cause a lot of people to get sucked into big screen TV’s and other big ticket items they really can’t afford.  In this case, yes he technically could afford the new $500 guitar (although Mom didn’t think he needed it!) although he wouldn’t have been able to pay cash for it.

What is the grace period, and how much is the ridiculous interest rate they are hoping to charge you?  These companies aren’t in business because they love to give people free stuff.  They are looking for a profit and lots of it.  What exactly is the final date before the interest charges kick in?  We’ll call that D-Day.

My son still won’t tell me the interest rate, but I’m suspecting it’s at least 25% or more.  And even worse, I’ll guarantee that he didn’t actually know what it was when he signed on the dotted line.  Most people skim over that part in their excitement to get that shiny, new thing home.  The stores certainly aren’t going to tell you.  The law requires that they post it in a prominently in the contract, but that’s about the only place you will see that number show up, so it’s easily overlooked.

If you know the item must be fully paid for by June 1st, you need to divide the purchase price by that many months and see if that is a payment you can afford to make.  In Matt’s case, that would have been $50 a month for ten months – easily affordable on his salary.

It’s very important that you make sure you don’t miss any payments.  Keep a close eye on your statement every month so you know where you are in repayment schedule.  As an extra safety precaution – set a reminder in your phone a week or two ahead of time to make sure it is fully paid off by D-Day!

However, if the item is a large-ticket item and you can’t afford to pay it off within the grace period, you employ can a different strategy for step four.  You figure out how much you can afford to pay.  Let’s say it’s $50 bucks a month.  You still set up the automatic payments and watch the account very closely to make sure they are being applied.  You just won’t get the balance clear down to zero.  A few weeks before D-Day you will need to figure out where to move that remaining balance.

Let’s say there’s $500 remaining on the balance. Your best choice is to pay it off out of a savings account and then continue to pay that $50 a month for ten months back to your savings account.  That’s a smart move and saves you probably $50 to $100 worth of interest, although you lose a small amount of money on your savings account interest.

Or you might want to move it to a low interest credit card, or even to your overdraft account, which probably carries a lower interest rate than the store.  The important thing is that you have to pay off every cent of that balance BEFORE the final due date.  If you are even one day late, blammo!  You are going to get hit by that big fee.  Think of it as a big boulder waiting to drop right on your wallet.

The best part is that when you do it like this, you get to sit back and laugh at that darn store.  They gave you the free use of their money for up to a year thinking you were going to be like all those other poor saps and pay that Stupid Tax, but you outsmarted them and now you can laugh all the way to the bank!

2 Comments on Outsmart the “Same as Cash” Programs