Now that it’s been a few years since our sons Eagle Project, I can look back with a bit more perspective.  I can see some of the things we did well and a few areas where we pretty much crashed and burned.

One thing I can tell you is that these Eagle Projects are HARD. It can cause a lot of stress on both the parents and the Scout.  In a way, an Eagle Project is supposed to be hard. If it’s too easy, the Scout doesn’t learn the lessons needed from this process. But if it’s too hard or if too much pressure is added by the parents, he might quit, which would be sad.

In our particular case, our son was going through an especially wretched period of his teenage years.  For months (maybe a year or two!), he was always angry and massively uncooperative. So I’m not imaging how rough it was for all of us. It’s sort of a miracle that he completed his project at all!

His Project was a nice one that should’ve been fairly easy, but it wasn’t quite as smooth as we’d hoped. He was the victim of considerable bullying during his early years, so he decided to do a Buddy Bench at a local Elementary.  Build a simple little bench – how hard can that be? Ha ha ha!  Famous last words when you’re dealing with the complexity of a School District. 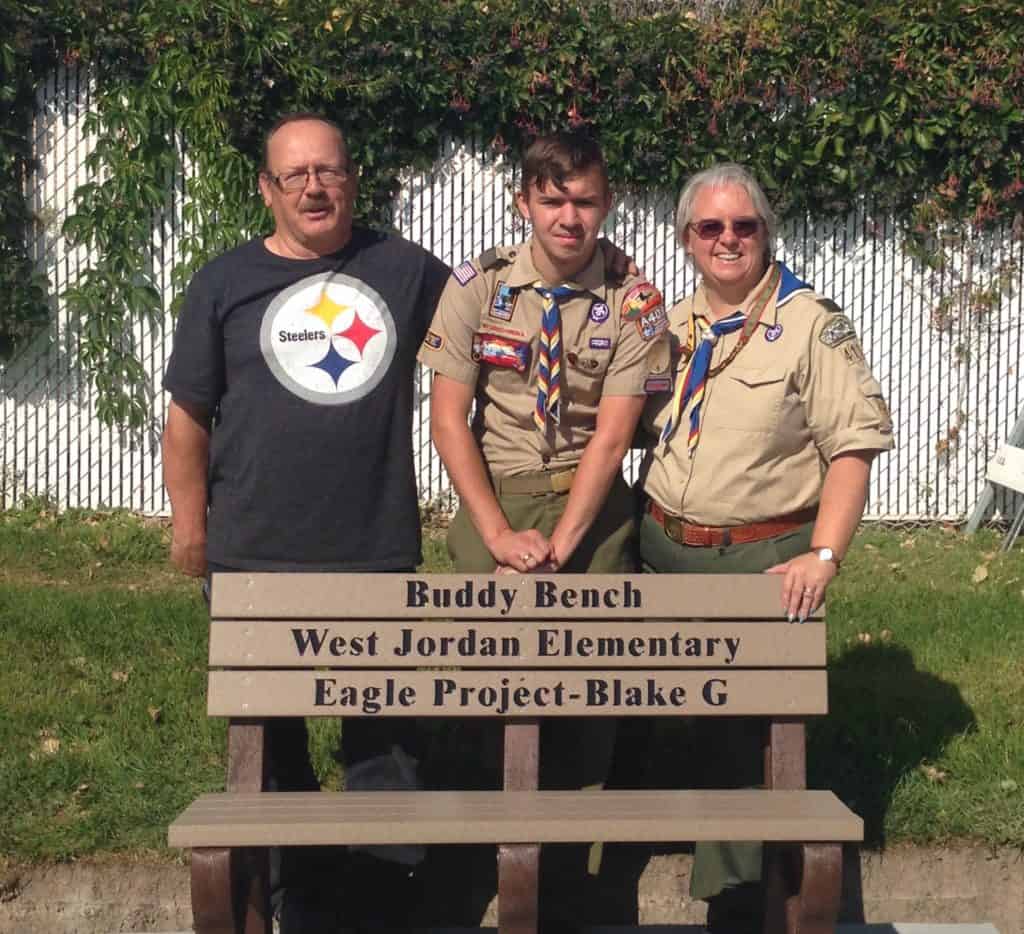 This entailed a considerable amount of red tape and safety regs from the school district that he had to plow through. And there were a number of meetings, emails, phone calls, etc. to get through it. Fortunately, the Principal, the safety superintendent, and the school custodian were all Eagle Scouts, so they were a huge help.

So here are a few do’s and don’ts we learned.

DON’T do anything FOR him. That was sooooo hard for me! I have decades of experience in blasting through red tape and I had to just butt out and let him do it. I despise parents who take over their kids science fair project or their Pinewood Derby car, so that helped me to keep my itchy fingers OFF.

DO – encourage all you want. Ask questions all you want, guide a little.  But anything that needs to be DONE, your Scout HAS to do it.  It just isn’t fair to him or the other Scouts who do their project fairly.  Even if he does it WRONG, just go ahead and let him do it wrong.  Even if it kills you.  (I promise – it won’t ACTUALLY kill you and he’ll learn something from the mistake.)

DO – help him select a Project Advisor. I thank God that we had a Scout Leader/parent who was willing to step in as his Project Advisor. I don’t think we’d have survived without that help. We deliberately chose a parent with a similar ADHD son because he knew exactly how to keep Blake right on track with text check-ins and and reminders.

And a kid will always listen to a non-parent rather than a parent. Doesn’t have to be the Scoutmaster, could be a grandparent, a neighbor, a youth group leader, or whoever will be just firm enough to keep your kid on the ball.

DON’T – let him skimp on the paperwork OR put it off til the last minute.  If I had a dollar for every time he said “Mom, it’s FINE!”, when it clearly WASN’T fine, I’d be so rich!  The paperwork is pretty time-consuming and complicated, but it’s a very important part of the work.  Be prepared to go through several drafts and call on your Advisor to help as needed.

I helped out the son of one of our other Scout leaders and I just remember telling him – MORE WORDS, many much more words!  These guys think that four words and a paragraph are pretty much the same thing, right?

DO – Make him type it.  It’s kind of funny to read through all the gnarly handwriting and mispelled words these guys come up with, but if you do the online .pdf version, then he can revise and edit the text easily without re-typing it.  And be sure to get lots of good pictures of his Eagle Project.

DO – make him attend an Eagle Ceremony prior to his own.   I coordinate our Eagle Court of Honor ceremonies, so my boy had sat through several of them.  Ours are probably more elaborate than most, but you definitely want him to see one.  It gives him an idea of what to expect, but I also feel they are also a good inspiration for these guys.

When they see how proud these parents and leaders are and how the achievement is celebrated, that’s important to keep him slogging through.  An Eagle Project is such a big achievement, so I love to see these kids get the recognition they deserve.  And now that female Scouts are being welcomed into our Scout Troop, I may be doing a ceremony for a young lady a few years down the line.  Our older Scouts (Ventures) have been successfully co-ed for several years now.

DON’T – start planning the ceremony or picking the date until everything is all signed and sealed.  That is one big lesson I have learned from helping probably a dozen Scouts through their ceremonies.  The process nearly always takes longer than you ever think it will, and having a hard deadline in place just adds extra stress to the process.  I think Blake’s final Board of Review didn’t happen until exactly a week before the ceremony.  It was a bit of a white-knuckle experience since we’d already sent out the invitations, bought the cake, and put his name in the program.  Yeah, don’t do that.

One thing your Scout may need a little help with is getting all the detailed records together for the actual application.  The Council tends to be fairly strict on leadership requirements, merit badge dates, and all the technical requirements.  I get it, they have to check all the boxes off.  But if your Advancement person isn’t as diligent as ours was, you may have some struggles with that.  When I saw what all was involved in the technical portion of the application, I was SO grateful to Tim, our Advancement guy.  He’s been doing it for probably 20 years and keeps impeccable records, which was incredibly helpful.

And at the end, sit back and let him enjoy that ceremony.  Our boy shared his ceremony with four other Scouts, which were all Scouts my husband and I had known and worked with as merit badge counselors for 4 to 6 years, so it was extra rewarding to see all of them up there getting their awards together.  I think I can say, it was stressful, but it was worth it.

I LOVE this picture.  It’s up on my wall in my office.  These guys are such characters!  They’re all in College now and doing great.

Ways to SPICE Up Your Campouts

3 Comments on How to Survive Your Son’s Eagle Project