Adult kids don’t always have the best judgement.  Plus after a couple of decades of depending on the bank of Mom and Dad, it’s a hard habit to break.  But part of good parenting is to gently ease them out of the nest to allow them the responsibility for their financial lives.

I have two adult sons that I love like crazy.  They are awesome kids, but like most adult kids, they stumble once in a while.  Sometimes its just due to poor decisions, but more often it’s just life smacking them in the face.  Sometimes there is an unexpected bill, or a major car problem.  Once in a while, they do something dumb and get fired.  Life isn’t always smooth, even for experienced adults.  And for these young people just starting out, shit happens sometimes.  It’s an expected side effect of the growing up process. 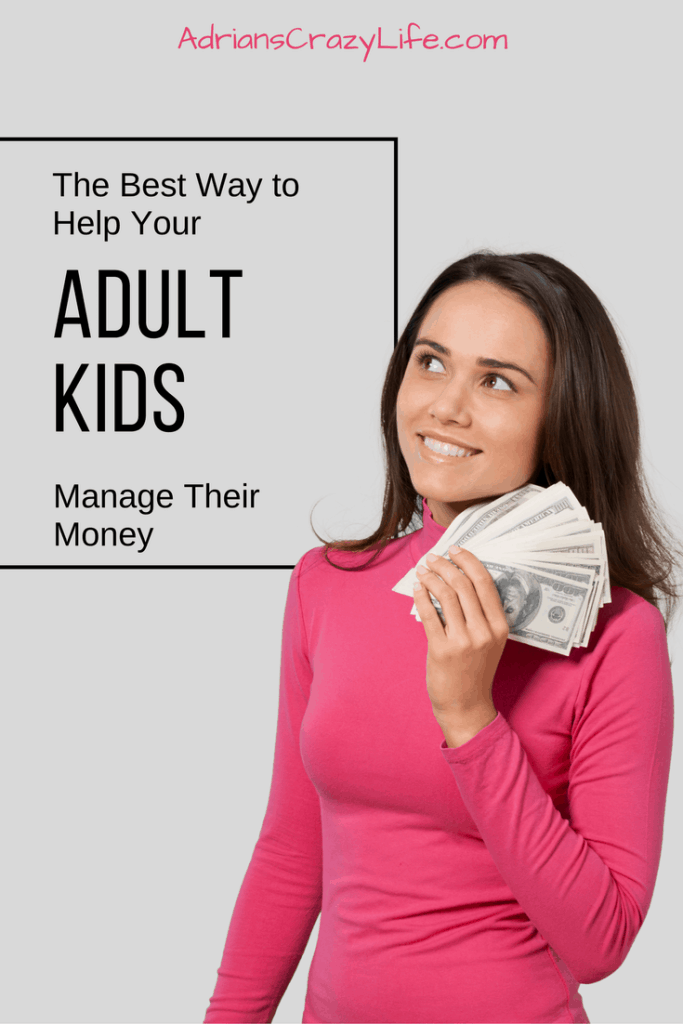 As a parent, your instinct is to jump right into fix-it mode to just dive in and rescue them.  After all, that’s what you’ve been doing for the last couple of decades.  But I’ve seen quite a few of my friends go down that road and it can end up in a very unproductive place.  They do without by “lending” money to their kids that never gets paid back, they struggle with having kids move back in with them – sometimes for years at a time.  Usually, they bring along an assortment of kids, boyfriends, husbands, or pets.  I just can’t see myself doing that. So here’s how I do it with my kids:

I think this step needs to happen BEFORE the “bad thing” happens.  In fact, I think it needs to be an on-going discussion, beginning in the early teen years.  Adult kids today usually have a pretty easy time of it and I don’t think that they really have a good understanding that life can be HARD.  Kids today often aren’t prepared for those bad times.  Some kids turn to substance abuse or even suicide, because they have no resources to cope with those rainy days.

Share with them some of the difficulties of your own life and don’t sugar-coat things.  People get sick, jobs are lost, friendships and romances come and go.  Sometimes bad things happen to good people through no fault of their own.  Teach them to expect it and to prepare for it.  Saving for a rainy day is an alien concept among young adults.  You can’t blame them really – many of them have never experienced an actual rainy day, and it comes as a nasty wake-up call when something inevitably happens.

Step 2 – Get the Facts and Analyze the Situation.

Our oldest son recently came to us with a money problem – a rare occurrence.  His 14-year-old van had finally given up the ghost and he needed a new car.  As a newly single Dad of four children (long story), his options were a pretty limited, but he needed to get to work and get the kids around.

Obviously, this wasn’t the same situation as a kid who has partied too hard and wrecked their car.  Or someone who had a car die from simple neglect or a repo.  This was a case of someone who was trying their best to get by and just ran out of luck.

I think this is an important step that a lot of parents overlook.  You aren’t going to be there forever to bail them out.  So their 20’s and 30’s are a time when they should be looking at trying to solve their own problems as best they can.  Be realistic and don’t be distracted by any emotional displays from your little darlings.  After all, temper tantrums and whining may have served them well during the teenage years.  But now is a time to grow up and face the music.  And be prepared for them to not like some of the options.  They may not enjoy riding the bus for a couple of months, or driving a crappy car, or living in a dump with several roommates.  But they certainly are legitimate solutions that many young people have to endure.

With our son, we spent a couple of weeks talking about credit scores, loan options, ideas for generating additional income, and figuring out what he could reasonably afford for a replacement vehicle.  (Fortunately, he had a kind friend who lent him a car for a few weeks until we came down for our Christmas visit.)  We also talked about the possibility that we might need to co-sign a loan with him, and why we might not feel comfortable with that.  It’s a great time for a respectful and frank money discussion between adults.  And that’s exactly what we had.

Step 4 – Decide if you Want to Help and How.

Help for adult kids does not always entail whipping out your checkbook to make the problem go away.  In fact, that usually is NOT a good move at all.  Sometimes the help can just be talking through the options with them and helping them to make a good decision.  You can send them off to gather more info and explore all their options.  Sometimes, you just have to have the hard conversation with them.  As in we love you, but you got yourself into this mess, now you need to figure a way out.  We will still love you, advise you and cheer on every bit of your progress.  But we aren’t going to support your poor behavior like over-partying, couch-surfing, jumping into a career of basket weaving, or using Mom and Dad as an interest-free, no-payback loan factory – ugh!

If you do choose to offer help, it is perfectly alright (and desirable!) to set strict conditions.  Examples: you may live with me for the next two months, BUT you have to show me where you are saving for your first month’s rent AND you have to help with chores, and buy some of the groceries.  OR I will lend you half the money for your new car, but it has to be paid back in regular monthly payments by the end of the the year.  AND you are going to have to get a better job to pay for your half of the car.  And then you need to enforce it.  Kids will live up (or down) to your expectations, so set high ones and don’t let them slide out of it.

The Result of the Car Story

In our case, we agreed that we would co-sign a loan for him IF he set it up on automatic payments.  Then he wouldn’t be tempted to skip any payments or pay late.  We would also go with him to the car dealer to help select an appropriate car.  I just happen to be a crack negotiator, so I would teach him how to negotiate the deal (see my post on how to get a good deal on a car) with the car dealer.

Happily, we found a very nice car on our first try.  It was in great mechanical shape and well within his budget.  He was even able to qualify for it without our help.  It was even half the down payment he had been prepared to make.  So it was a very happy ending all around.

Moral of the Story – You are NEVER going to be completely done with raising your kids.  Even in their 40’s and beyond, they are still going to need your advice and support.  But you don’t want to fall into that trap of enablement, especially if you are going to endanger your own financial well-being.  They offer car loans, home loans, and student loans, but they have yet to come up with a retirement loan!