Last week, my husband and I had a fun vacation.  Bizarrely enough, neither one of us had ever been to Yellowstone before, or even to any National Park.  We are such indoor people it seems kind of pointless to live in Utah surrounded by some of the best scenery in the country.  It’s like we’re almost wasting the state!  So we headed to Yellowstone for a week.

Disclaimer – this post contains affiliate links to products I love.  It’s one of the ways I support this site. 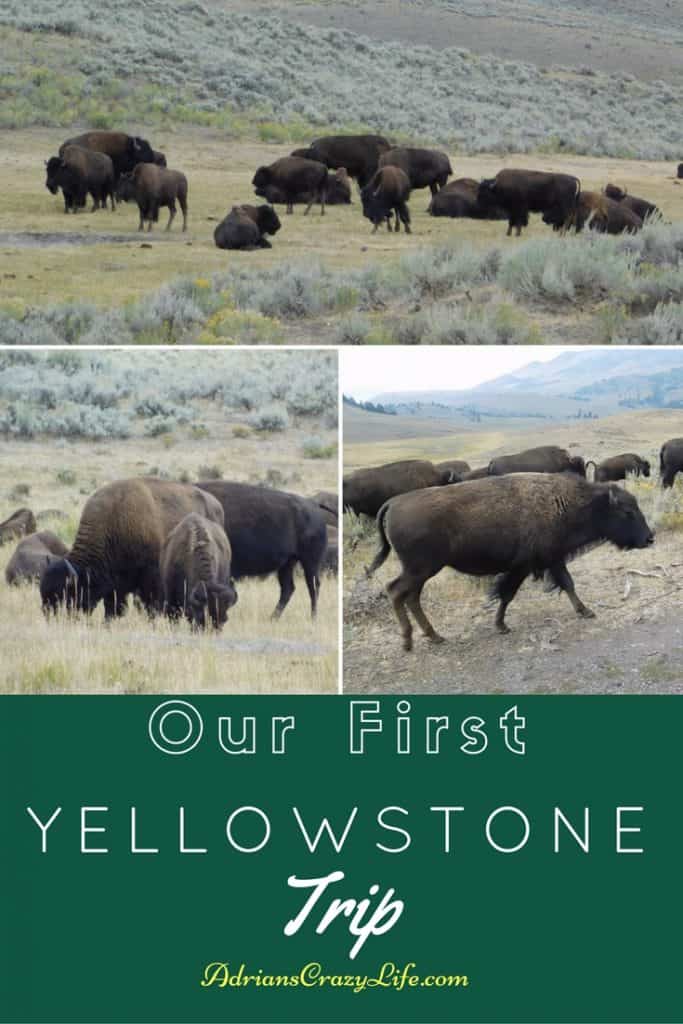 We couldn’t take any of the kids with us because they all had to work.  Plus our youngest son was starting his first week of college.  It was nice though for just the two of us to get away together.

Even better, since it was our first time, my friend Ashli gave me a guide that she has put together.  Man, was it HELPFUL.  Ashli blogs over at Dirt in My Shoes and she used to work as a Park Ranger in several National Parks.  So who else would be better to guide you around Yellowstone?

She has created these guides for all the different parks and she sells them to people.  It tells you day by day where are the best places to see, what to skip, where to park.  She even has a restaurant guide for all the cool places to eat in each National Park.  We tried several of her recommendations and we enjoyed all of them.

Even if you’ve been before, it’s great to have all these little insider tips and just have your route all planned out for you.  And you can deviate however you want.  We decided we were not all that interested in the geysers and hot pots.  So after Old Faithful and a couple of others, we skipped the rest and spent more time looking for wildlife.  That was my big goal.  I get excited if I just see a chipmunk or a squirrel, so I was thrilled at some of the animals we got to see. 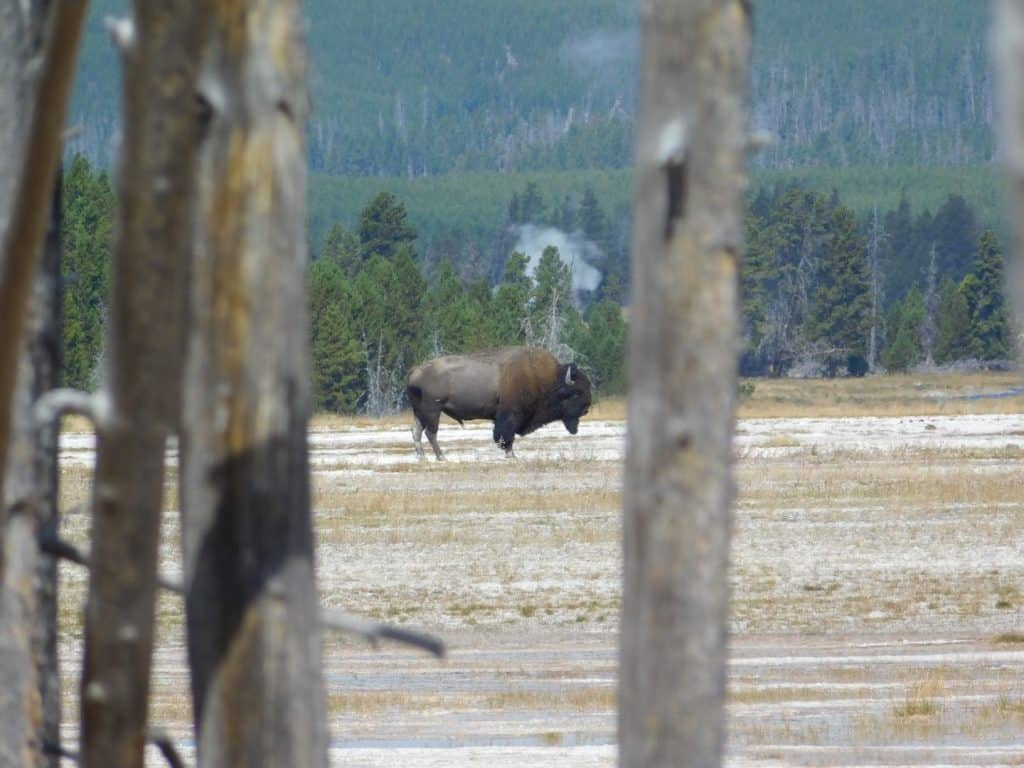 During the trip, we got some of the most awesome pictures! When my youngest son graduated in June, my daughter-in-law brought her little point ‘n shoot Nikon CoolPix camera.  The pictures she was able to get with it, were miles better than my husband was able to get with his big clunky DSLR.  We were clear across the stadium from him, and we could barely locate him (and he had flaming PINK hair at that point!).  While the pictures with Pam’s little camera – you could just about count the freckles on his nose!

Look at this gorgeous six-point elk we saw every single day when we passed this meadow.  I swear, he was the biggest show-off!  But look at the gorgeous picture I was able to get of him. 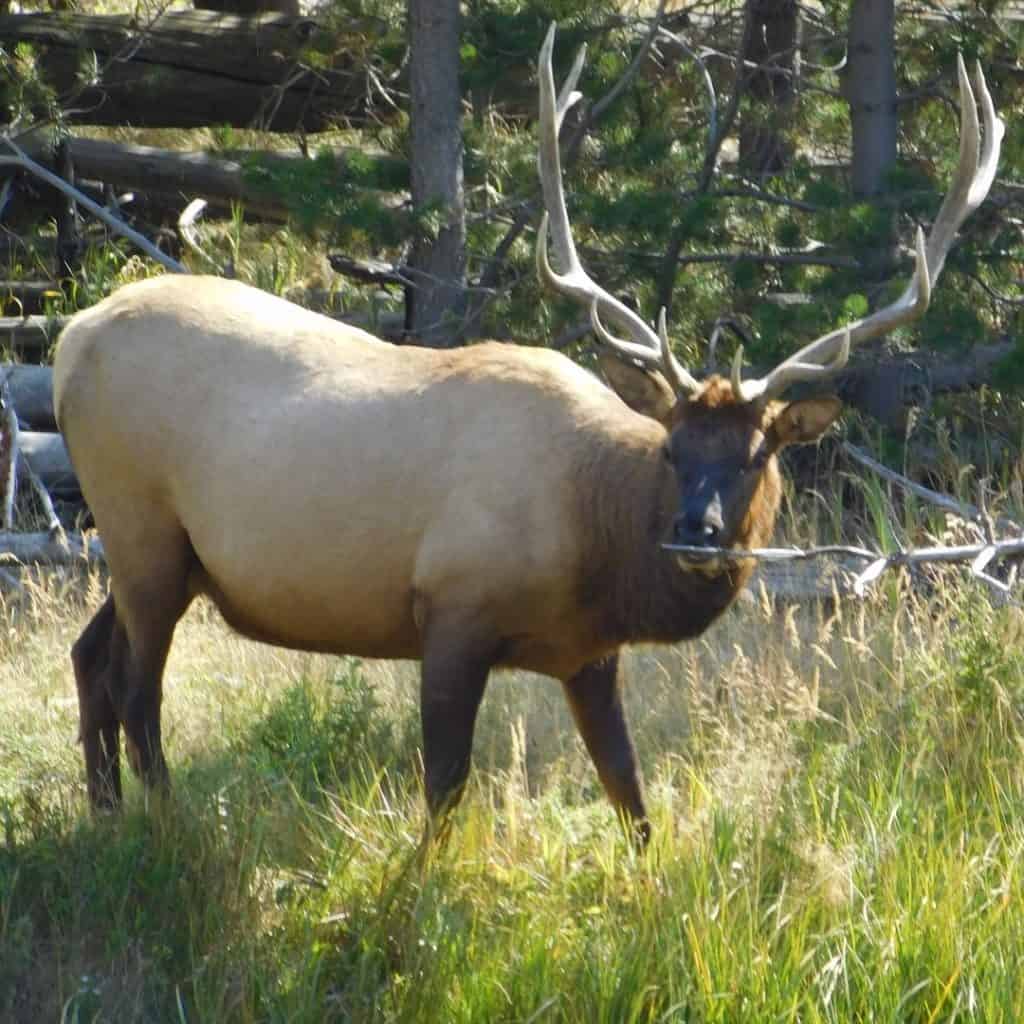 It looks like we are super close, but I am nowhere near that dumb (and I did see lots of dumb tourists getting waaaay too close to the wildlife!).  This picture shows how far away we actually are. 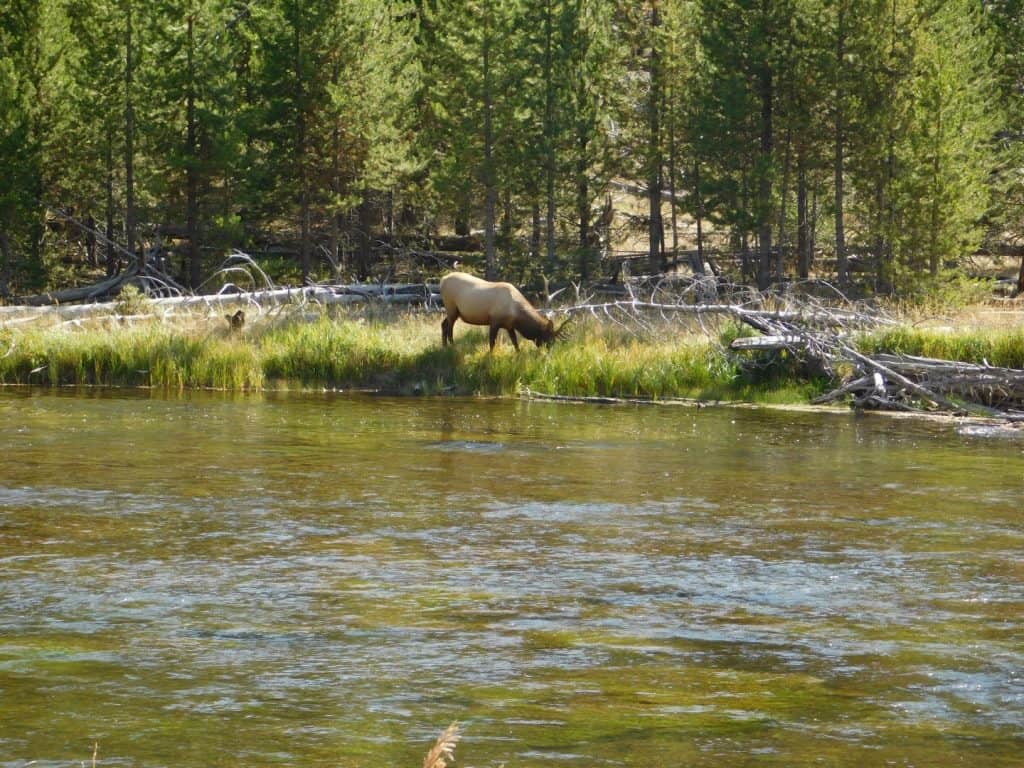 I bought this little Cool Pix camera from Amazon back in June and I have been so tickled with it!  It has a 40X optical zoom on it to get great closeups, but it’s not that much bigger than my phone.  And it can wirelessly transmit the pictures to my phone if I want to post them on Instagram or Facebook.  My husband lugs around this big awkward DSLR camera with the big lenses and his pictures aren’t nearly as good as this little baby!

This is the little cute little cabin we stayed at.  We were just outside the West Gate.  I called it the “Mouse House”, not just because it was so tiny, but because the first night we discovered there was a gap under the door juuuuust big enough for a tiny little mouse – eeek!  After a quick check under all the beds and in all the corners, we spent the rest of the time, stuffing old t-shirts under the door to keep the critters out! 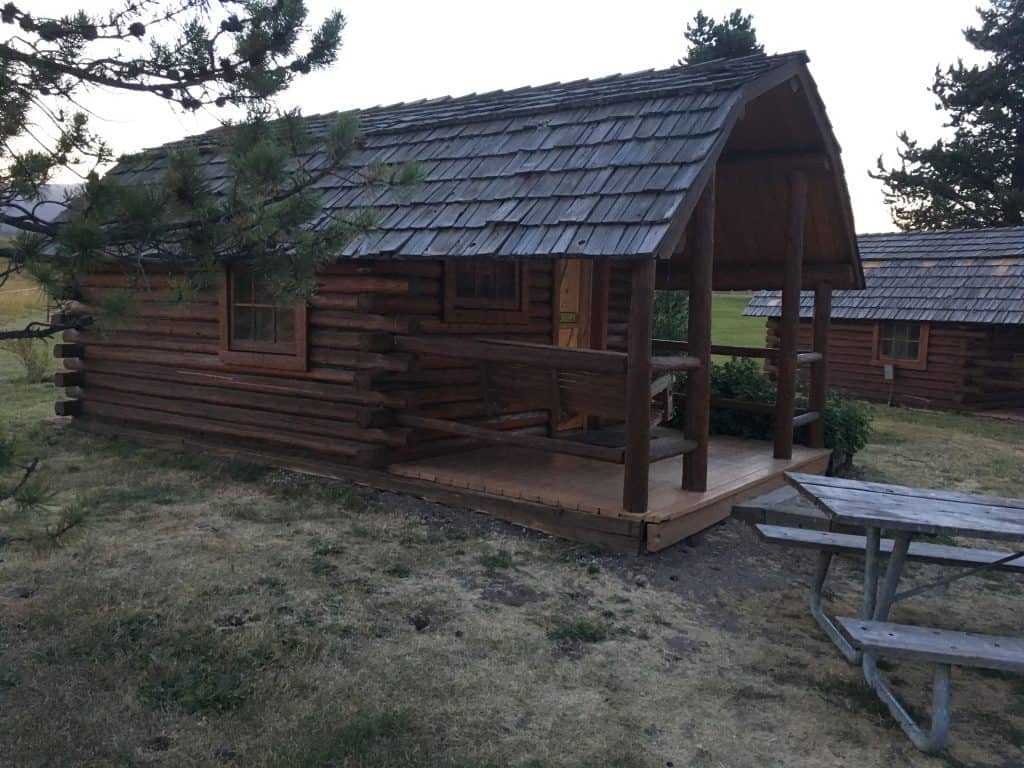 And what trip to Yellowstone would be complete without bears?

We kind of cheated through.  We didn’t see many bears in the wild and none of them were in a good spot for photos, but we took a quick stop at Bear World where we were able to get some terrific pictures there. 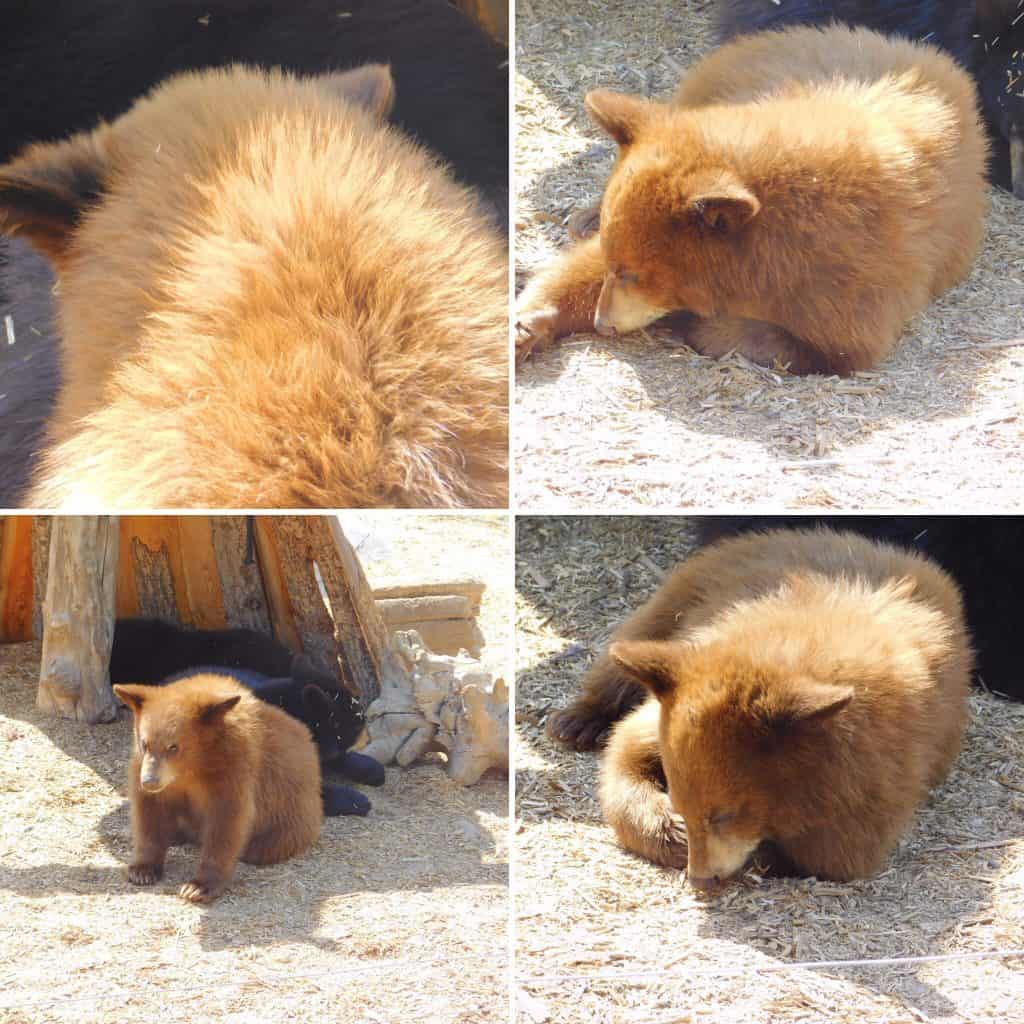 This is Lee, a 5-month-old cinnamon brown bear. She was so adorable with her two brothers. They also had a trio of 8-month-old cubs. They were so cute! 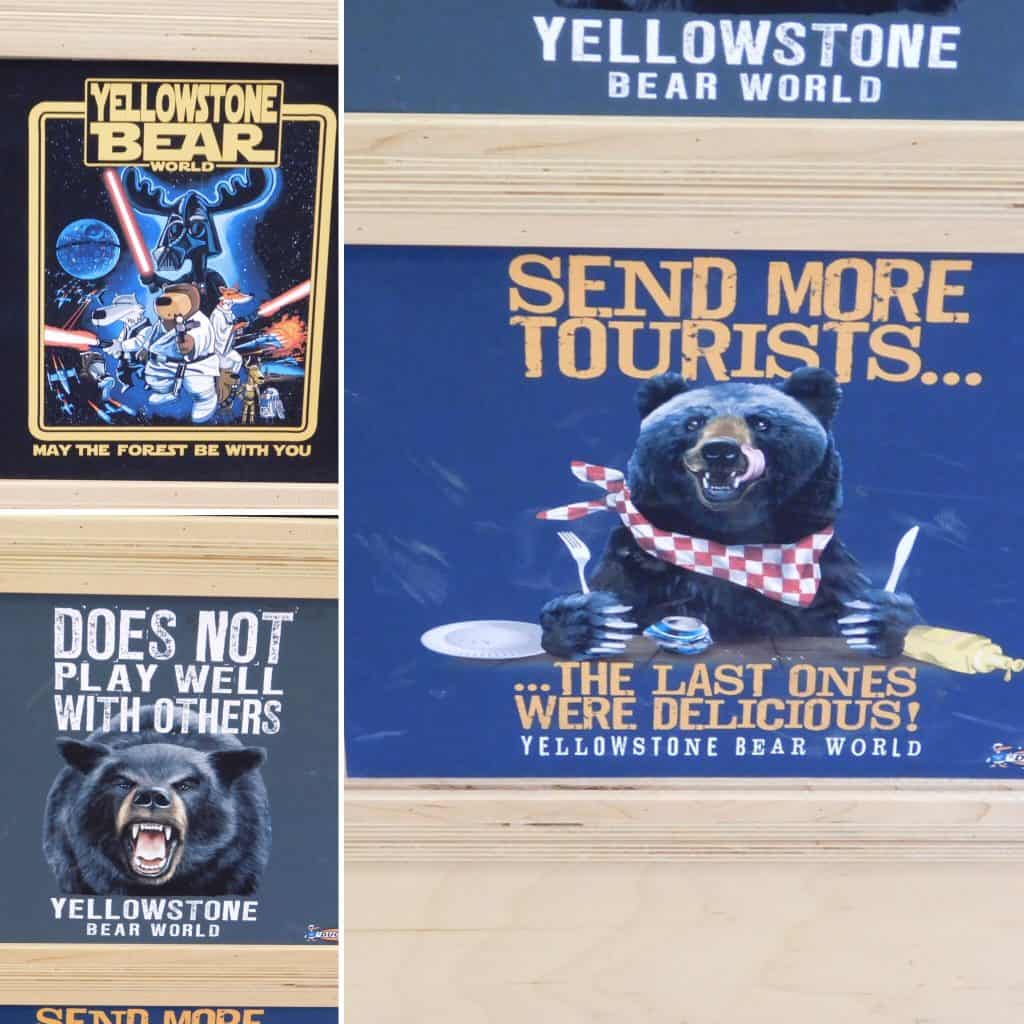 Look at these cool Yellowstone t-shirts we found. My husband bought the Star Wars one and I just wore it to ComicCon last week. It was a big hit! 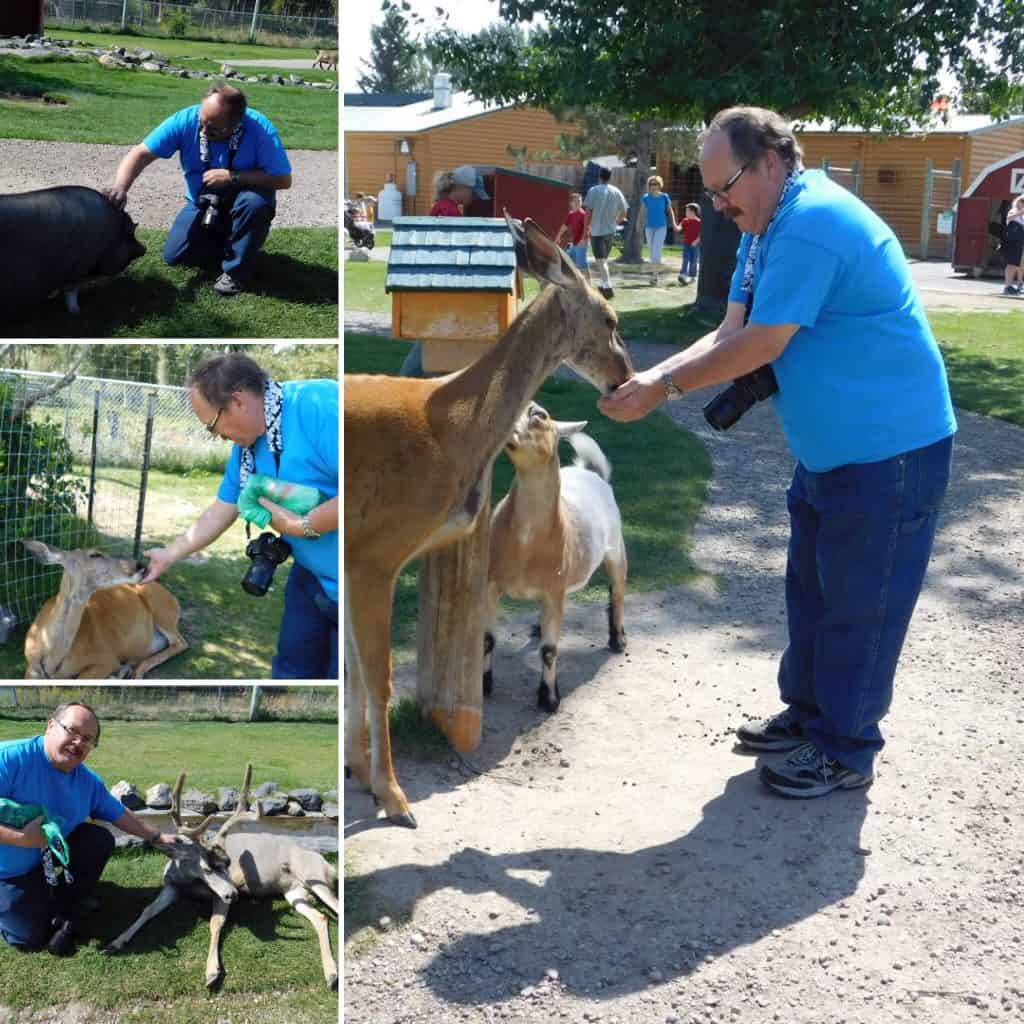 My husband loves animals, so he was having all kinds of fun at the petting zoo. The animals figured out where the food dispensers were and they had a little stake-out going on around them. So, he was making all sorts of friends – as long as the quarters held out…. 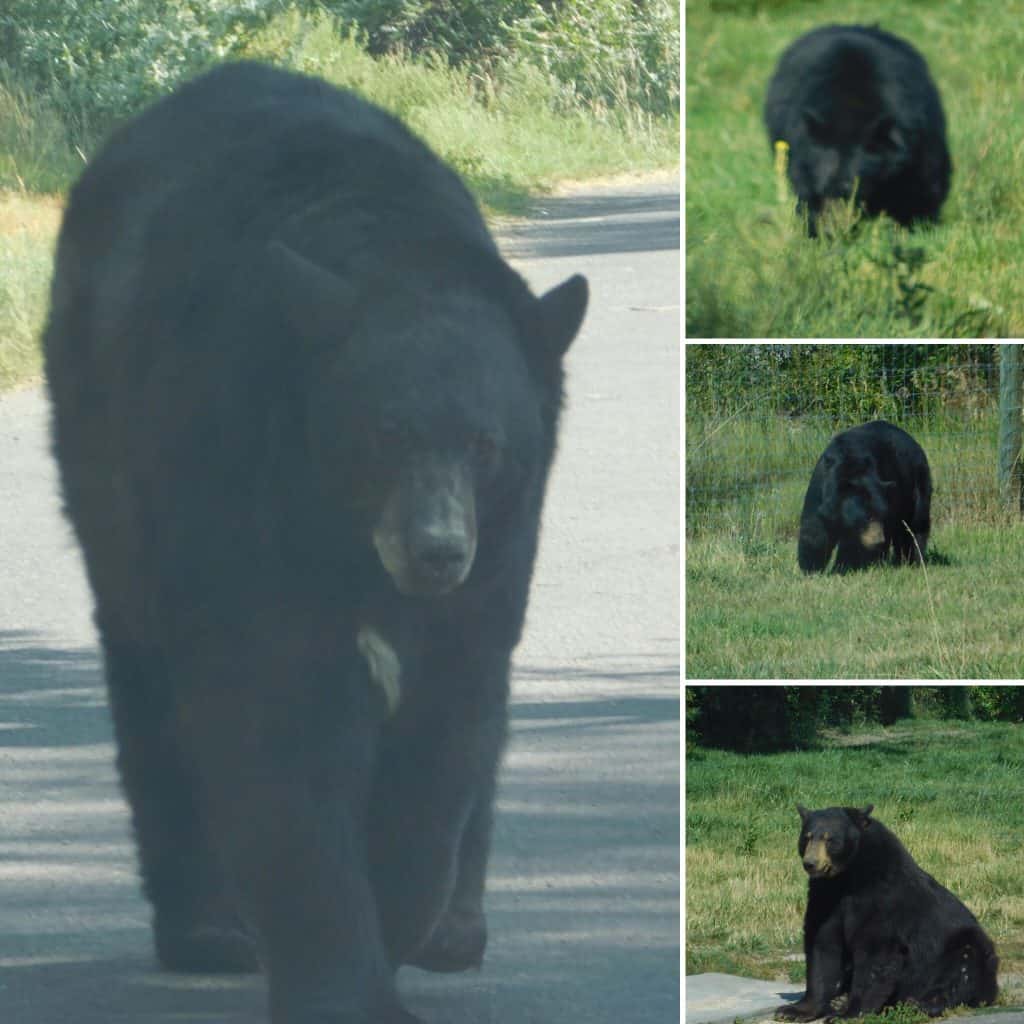 Here are the real stars of the show, they had grizzlies, black bears, brown bears, elk, deer, and moose. And you just drive your car around (with the windows up!) and take pictures like crazy as fast as you can, because you aren’t supposed to stop – although we did stop a few times.

Sadly, there were several major fires going on while we were there, so we had to alter our route a little bit and missed some of the things we would have liked to have seen.  But we had an awesome time on our trip and we are looking forward to going back again some day soon.

7 Comments on Our First-time Trip to Yellowstone