I’m a proud Mama today!  My son was just awarded his Eagle rank last night.  So, as we are getting ready to celebrate his achievement, I am scrambling to finish up his Scouting album so we can display it on his display table at his Eagle Court of Honor at the end of the month.

I’ve been to a half dozen of these ceremonies with our Troop over the years, and most families put together a pretty elaborate display, so the pressure is definitely on and I have been working on this album for a very long time.

I gave up my Stampin’ Up! business about three years ago and sad to say, I have an entire room full of unused stamps and other supplies from it, but the one thing I have kept up on is my digital scrapbooking.  I sometimes will use my software for my blog images rather than PicMonkey or Canva and I do throw together a new page now and then, when the mood strikes me.

I have quite a few pages in this album, so I will share a few of them in different posts as I go along.  Today’s pages are from his early years in Scouting – from his Cub days to his rookie years. 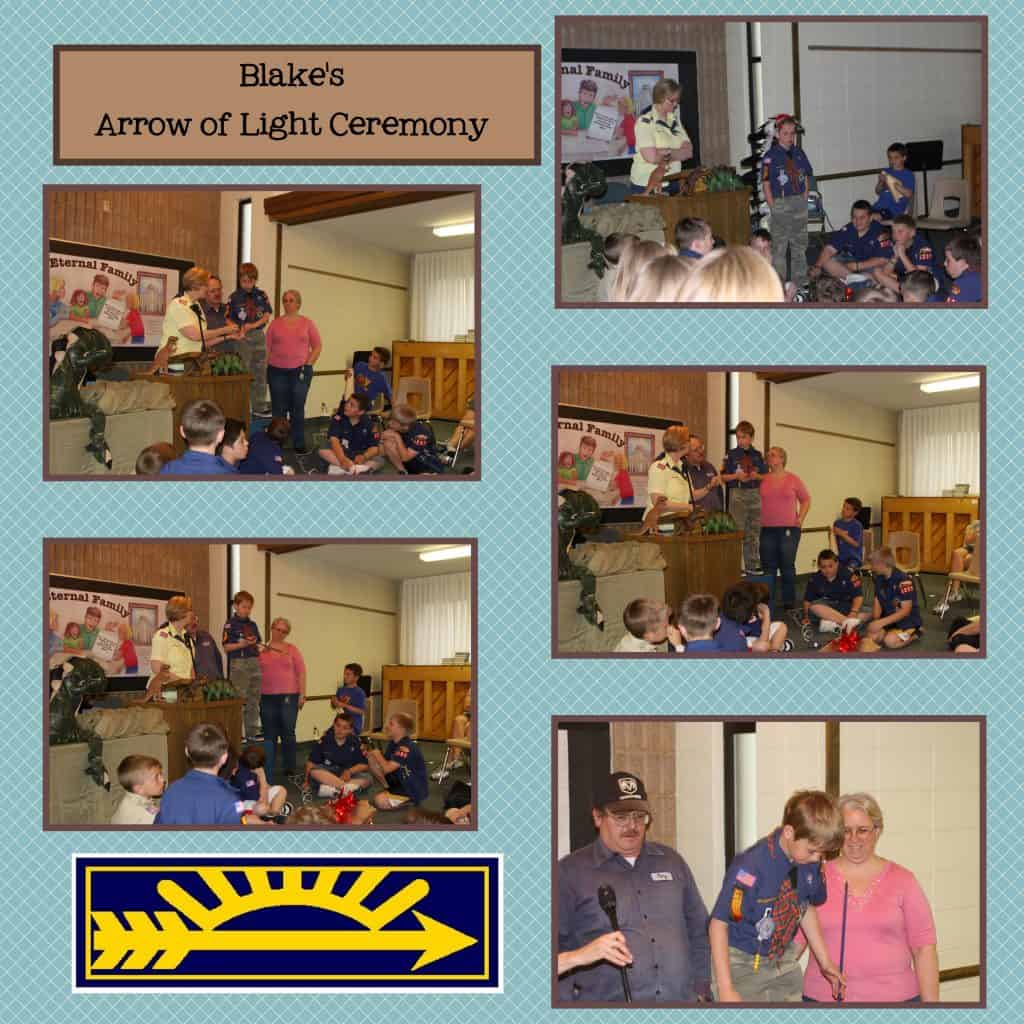 This was of course, his Arrow of Light ceremony that marks the end of his Cub Scout journey. Originally, he was part of a neighborhood Cub Pack and they did a very nice ceremony for him before before he transferred to the Community Troop at our current Methodist Church. 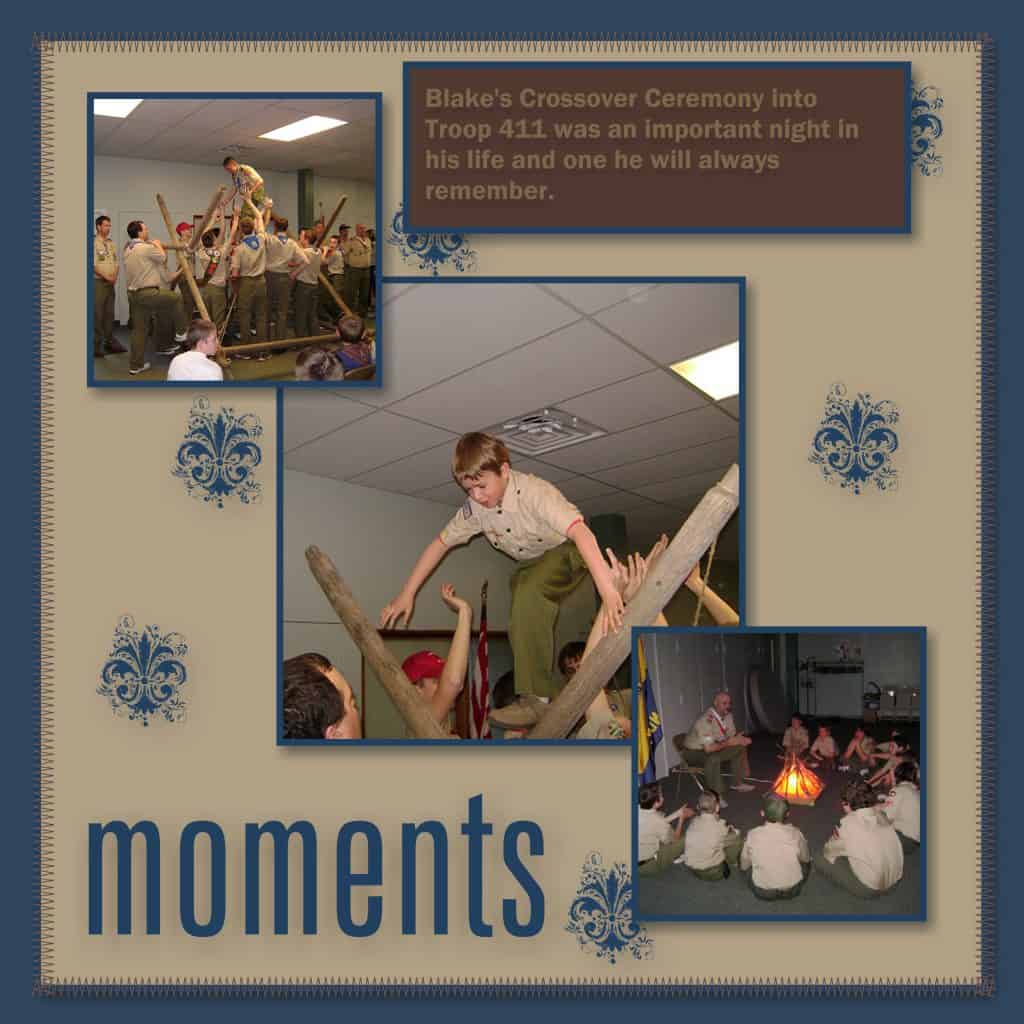 This was his crossover ceremony into Troop 411. Most Troops have a nice little bridge that the Scout daintily walks across to transition into his Scouting role. Not us – we build a very rickety bridge made out of the tepee poles from our tepee lashed together with ropes.  First the Scouts climb their way across it – which usually goes pretty well, but then they make the parents walk across it also.  That can have it’s hazards and in fact, his Rookie Scoutmaster who also had a son in this group, ended up breaking his ankle when he tried to jump down from the bridge and it’s bothered him ever since.  I opted for the less-popular “walk along the bottom rail” method because I didn’t want to fall on somebody and take out a Scout. 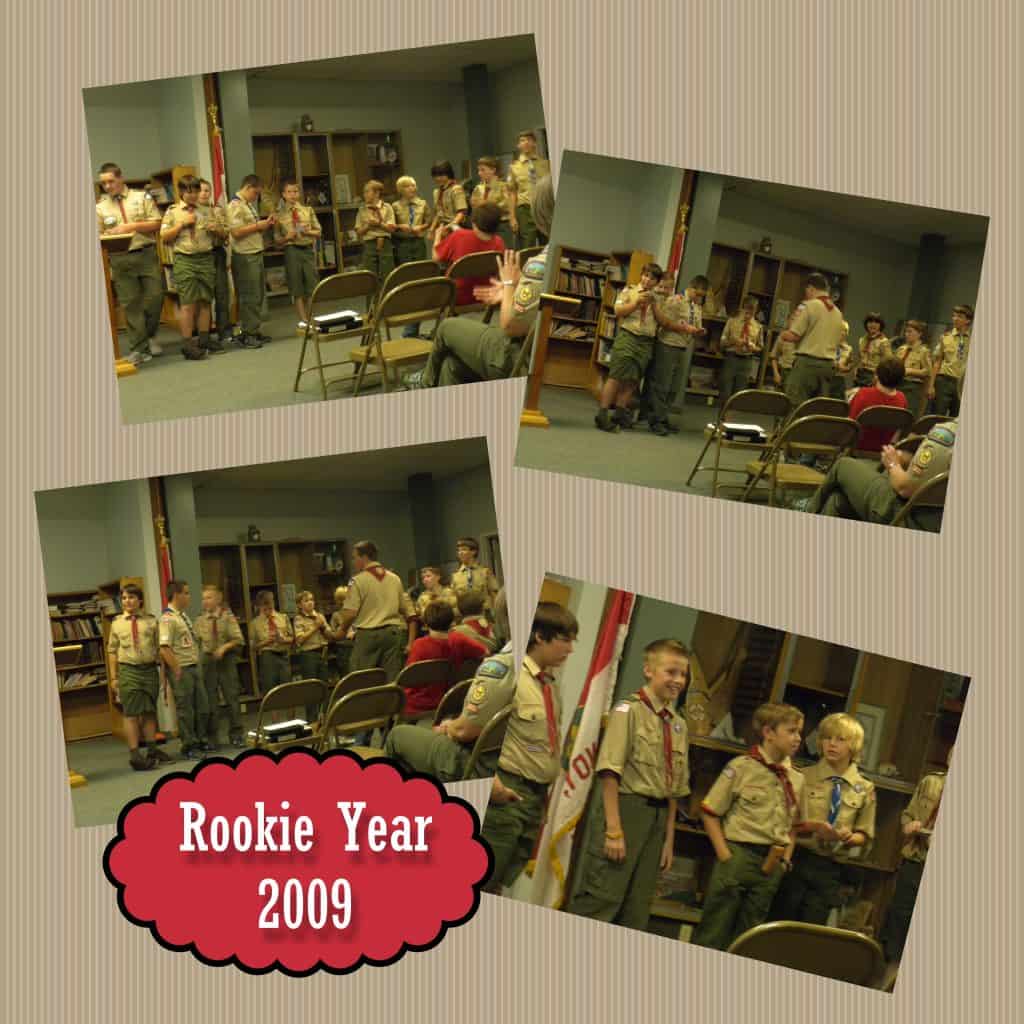 This was the boys’ first Court of Honor as Rookie Scouts.  I think it must have been after Summer Camp because they have their Summer Camp scarves on.  I see that Blake is prominently displaying his pocket knife on his belt.  He must have received his totin’ chip by then.  It’s so cute to see how little they were back then.  In the bottom picture, the dark-haired boy to his right is Michael Campbell and last night, they had back-to-back board of reviews, so they both crossed over on the same day and finished on the same day also, which is kind of cool. 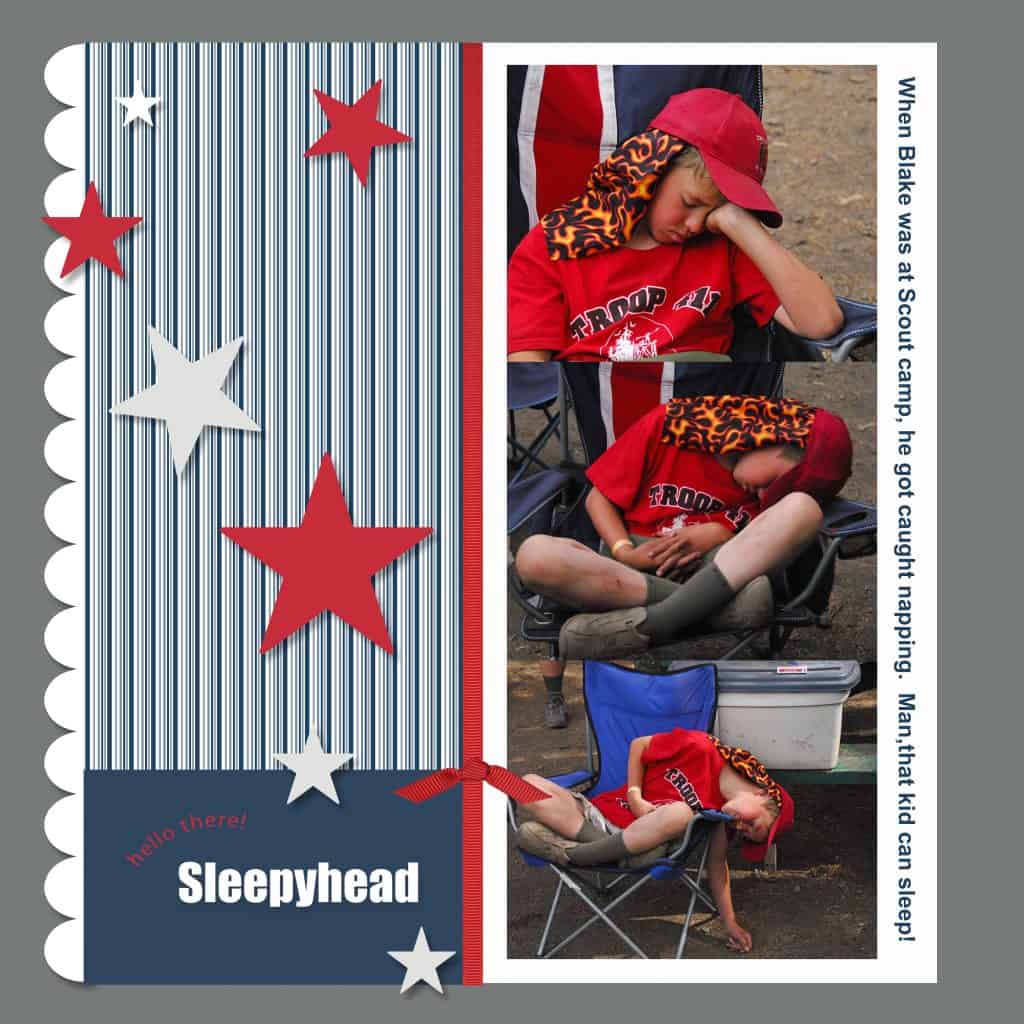 This page will always be my favorite.  This was captured by one of our Assistant Scoutmasters at his first Summer Camp and it documents Blake’s famed ability to fall sleep anywhere at any time.  If you’ll notice, the chair changes between the pictures and he is slightly less filthy in the last one, so there must have been more than one time he fell asleep in this pose.  Like the flaming neckflap on his hat?  His patrol at the time was called the Blazing Saddles, so they all had custom neckflaps made for them by one of the Moms.