Home » Best of » Dealing with OPS (Other People’s Stuff)
Best of, Organizing Tips

If you live in a house with other people, as most of my readers do, there are going to be times when you are going to have to deal with Other People’s Stuff (OPS).  You know, all the STUFF your family leaves ALL OVER THE HOUSE!

Unless you live with a herd of raging neatnicks, in which case I’m not sure why you’re reading my blog… Anyway, the other people’s stuff can range from towels on the bathroom floor, bookbags & briefcases left in the entryway, shoes (and socks – ew!) all OVER the house – my boys shed socks like a tree sheds leaves. 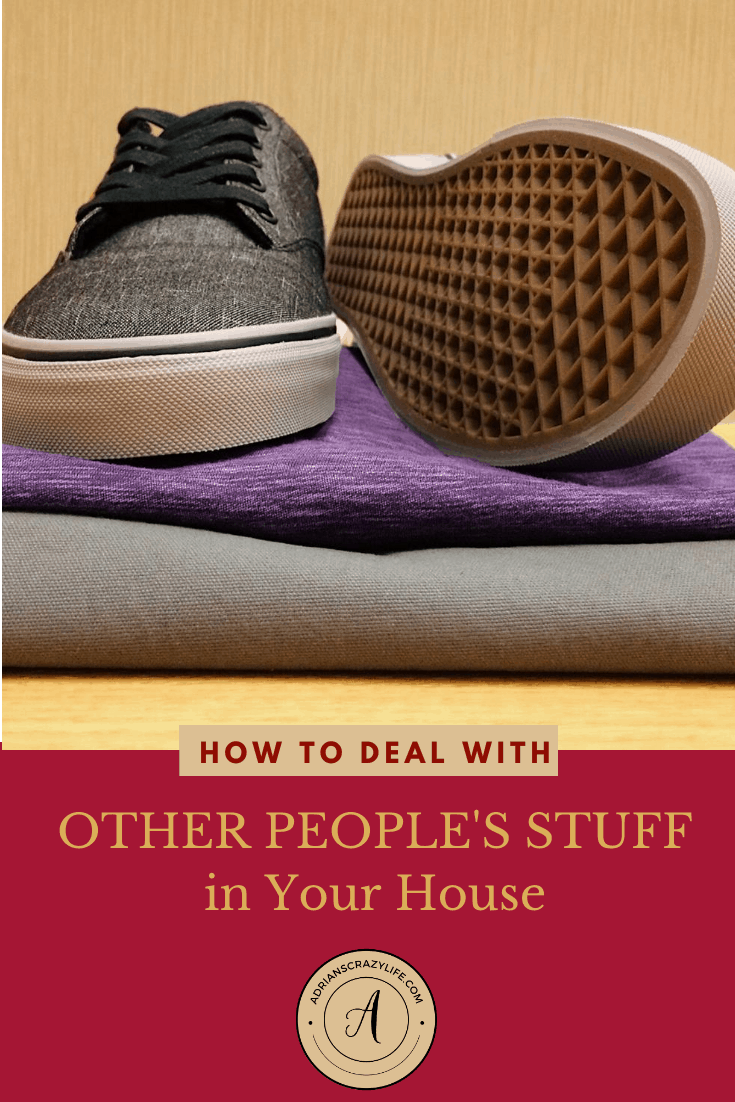 You may not be aware of it, but you have a choice of how you want to deal with the other people’s stuff. You basically have three choices:

My vote is for option 3 in most cases. Even very young children and very old husbands can be trained to pick up their things if you use the correct motivation.

I read a very interesting metaphor once – being a good parent is like being a good cop.  A good cop doesn’t come up and start yelling at you and take your misbehavior all personally.  He doesn’t get all dramatic and start talking about your filthy pig sty and putting a big guilt trip on you.  Instead, he calmly tells you what the law is, how you’ve broken the law, and hands you your ticket.  End of interaction.

Wouldn’t that be SO much easier than all the yelling and dramatics we’ve used all these years with our families.  They might make us feel a bit better, but in the end, they don’t work, and they just make your family resent you.  Trust me, I know this first-hand and over the years, I’ve managed to become a lot more zen and cop-like in my approach.

The trick is to make it more inconvenient do the wrong thing than it is to do the right thing (what you WANT them to do). It may take a few weeks to get them trained, but if you stick to your guns, your family will be self-cleaning in no time.

It’s only fair to give them fair warning that something new is going on and lay down some ground rules. You can do it in person or just leave notes in strategic locations. I’m actually a huge fan of notes because usually a written note has even more impact than what you say.

You want to say something to the effect of “Dear Family – I have implemented a zero tolerance policy for clutter in the following areas: Entry way, living room, and dining room. After today, anything found in these areas that does not belong there will be removed by the Management. Signed The Management (Mom).”

When the other people’s stuff appears, and trust me, it will appear almost immediately, what do you do? Well, naturally, you remove it. It is massively important to defend your territory or they won’t learn new habits.  Here’s the trick – Where you remove it to, is entirely YOUR choice. The one thing you shouldn’t do is remove it to any place where the OP wants it to be. Let me repeat that again because it’s important – you never want to put the item where the OP wants it.  You aren’t their maid – you are simply a cop enforcing the law.

My only exception to this is for sick OP’s or OP’s who are in crisis (midterms, big work projects, holiday crunch time, etc.)

Step 3 – Where to Put the Other People’s Stuff

So where to put it? Be creative. Have a little fun. You could put it in the dog house, the garage, the bathtub, under the bed, in the hall closet, or you could hold it hostage in a laundry basket in your closet.

Then when the desperate OP comes to you in search of the missing object, shrug and look vaguely around. “I don’t know, honey. Didn’t you put it away? You didn’t leave it in the front entryway did you?” pretending horror. If you’re feeling kind, you might give them a hint.  “I think I put a load of OPS in the garage somewhere…”. Or if they aren’t terribly late for anything, let them look for it for a while, to the tune of friendly suggestions about putting their stuff away next time.

They are likely to get mad. That’s OK, let them. Remind them that you gave them fair warning and that you are not responsible for keeping track of their stuff. It’s not your fault that they didn’t take you seriously, is it?  Help them find their stuff.  But gently remind them that they have a choice next time to put it away themselves.  Lather, rinse, repeat.  After a week or so, they will realize that you actually MEAN it this time, and start putting their stuff away, I promise.

As for the laundry basket hostage situation, feel free to demand bribes, extra chores, or extravagant promises for the return of valuable items, such as keys, iPods, and backpacks. For non-valuable items, use your own discretion. There is always the Goodwill pile.

I did this once when I found literally every pair of shoes my two sons owned lying around the house. I gathered up all the shoes in a basket.  Then I insisted that they sing “I’m a Little Teapot” complete with arm movements to get them back. They were good sports about it and it was VERY entertaining, but the next time I threatened to videotape it for Facebook. I haven’t found nearly as many shoes lying around since then…

7 Ways to Make Your House SELF CLEANING

18 Comments on Dealing with OPS (Other People’s Stuff)