There!  I said it – I think college tuition is a huge rip-off.  I know it’s supposed to be the American Dream, but I was skeptical of it when I was a kid.  If anything, I’ve gotten more skeptical as I’ve gotten older.  College tuition inflation has skyrocketed FAR more than it should have.
The latest stat I’ve seen is that the cost for college tuition has increased by 1,122% over the last 30 years.  During that time, medical costs have increased by only half of that and housing has increased by just one quarter.  If cable TV had increased that much, we would be spending a lot more time playing cards and listening to the radio!
Next to your house, probably the biggest expense you will have in your life is paying for a college education for your kids.  Therefore, it would only make sense to give it a LOT of thought.  However, most parents only have one thought and that’s college tuition.  HOW they are going to pay for it.  Maybe the question to ask is should be asking IF they should be paying for college tuition. 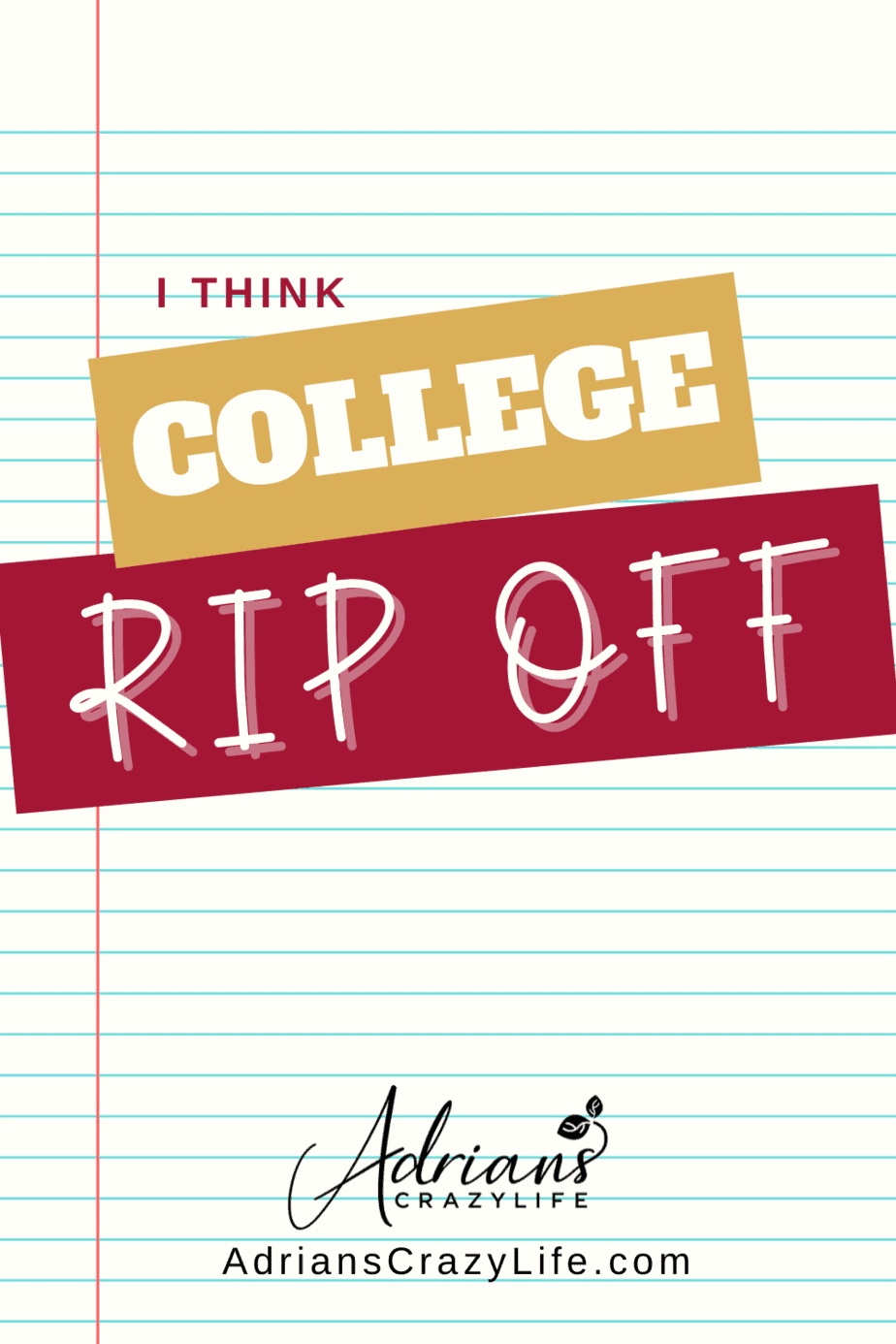 Admittedly, this is an unorthodox and probably controversial view.  But I really question if today’s college programs are worth these ridiculous prices.  Why do I say that?  Well, for one thing, I think most colleges are not only drastically overpriced, they offer a lot of irrelevant material that isn’t useful in the real world – things like French literature, Philosophy, and Western Civilization.  They are interesting and might have some small usefulness, but I would estimate that most kids won’t use half the classes they are taking.

I also think they do a terrible job of helping kids pick their major and stay focused in the right direction. I have known so many kids who waste a lot of time in college.  They change majors, drop out, or go into a totally unrelated field.  I think if we started them out knowing more about what they want, it’d be better.

Admittedly, kids change as they get older, but they could do a lot more to teach kids about realistic expectations in various job fields.  I think it would be smart to require short-term internships and job shadowing in 3 to 5 different fields before a student is allowed to select a major.

We need to do a better job of helping kids pick their majors for college.

Another problem is that parents have tremendous social pressure to pay these incredible college tuition rates.  Even if they can’t afford it.  It’s the ultimate “keeping up with the Joneses” situation.  All the kid’s friends around the neighborhood are touring colleges and visiting financial aid offices. It’s embarrassing to admit that you just don’t have the cash to take that path.  Especially if you have more than one kid.

So parents end up mortgaging their homes, using their retirement savings, or going into huge amounts of debt to pay for college tuition.  Or the kid takes on a huge burden of student loan debt without any clue of what a serious handicap that is going to be once they get out of school and trying to start their adult life.  Most 18-year-old kids just aren’t mature enough to make those decisions.

We had that with our oldest son, Ryan. He went through one of those pricey computer trade school programs, loved it, got great marks in it.  But he got frustrated with the lack of placement services at the end.  So he decided to go off and get a job as an exterminator with his best friend.  Yes, an exterminator – sigh.
He has a better job now, but it isn’t particularly computer-related.  And after nearly 10 years, a lot of his education, particularly in the fast-paced computer world, is thoroughly outdated.

And on the other hand, I see people all around me who have done quite well in the world without having that all-important college degree.  I don’t have any degree.  But, I’ve had a great career and never really had a problem with it.  I mean, I went to school in 1985 – what the heck would that have helped?

Lots of people do just fine without that all-important college degree.  Like me.

Same thing for my mother, sister, my nieces & nephews, and both of my older sons.  Yet they all have great jobs, pretty nice houses.  They aren’t rich, but they’re getting by OK.  And they have none of those huge debts for a college education.

Could they earn more if they had a diploma?  Possibly, but hard work and solid job experience are nothing to sneeze at.  And don’t forget how many kids do graduate with a degree – even an advanced degree, and still end up working at Starbucks or Target.

I have some friends who have kids in college who are in their early 20’s.  They never made them work a job because they were so worried about keeping their grades up for college.  So, these kids have never actually worked ever in their lives.

I keep wondering what is going to happen if they get out of college with that shiny new diploma and discover that they have no work ethic or ability to put up with a bullshit that is frequently a big part of life in the big city.  My son may not have a college degree in his back pocket.  But by 25, he has 10 years of solid job experience and a few good lessons from the school of hard knocks.

What if your kids have a degree, but no work ethic or stamina in the job market?  Those two don’t go hand in hand.

I’m at a tough point, because my youngest is now a High School Junior.  So this question is about to get a lot more “real” for me over the next two years.  And I honestly don’t know what I’m going to do.  His grades in High School are just so-so.  He hasn’t got a lot of motivation or interest in going to college.  I keep trying to convince him that the scholarships mostly go to the kids with the A and B averages, but he doesn’t want to hear it.

I don’t think we could afford a big-ticket college, but we have enough set aside for Community College if he decides he wants to go in that direction.  After that, he’s going to have to get very serious, about getting some scholarships, getting into a fast-track trade school program like his brothers.  Or else doing a half work/half school program and plan on living in our basement for the next four or five years.  Oh joy…

I think college probably IS the golden key. It definitely does open a lot of doors. But those same doors are still going to open for a silver key (trade school), a brass key (community college or night school, hopefully on the on-your-own-dime plan), or even the aluminum key (just skip college and work your butt off for your success).

College IS the golden key, but there’s also a silver key, a brass key, and an aluminum key.

Another thing to think about before you sign for those student loans.  There are college loans and all sorts of other loans, but there is no such thing as a retirement loan.  We all want to give everything we can to our kids, but you have to put that retirement first.  Or your brilliantly educated kids could end up with broke parents living in their basement.  Now, THAT’S a scary thought!

The Secret to Paying for College with All Cash

8 Comments on I Think College Tuition is a Rip-Off!