And I’m totally OK with that.  As they say, there’s a method to my madness and I’m doing it for a very specific reason.  Well, actually a couple of reasons.

For one thing, I assign household chores more or less permanently.  The reason I do that is for my convenience.  If the trash isn’t taken out or the dishwasher isn’t emptied, I don’t want to have to go through a whole song and dance trying to figure out which kid is responsible.  You know the whole – well it’s Tuesday so that’s normally my day, but I traded with him so technically, it’s really HIS day, blah, blah, blah.  This Mama ain’t got time for that. 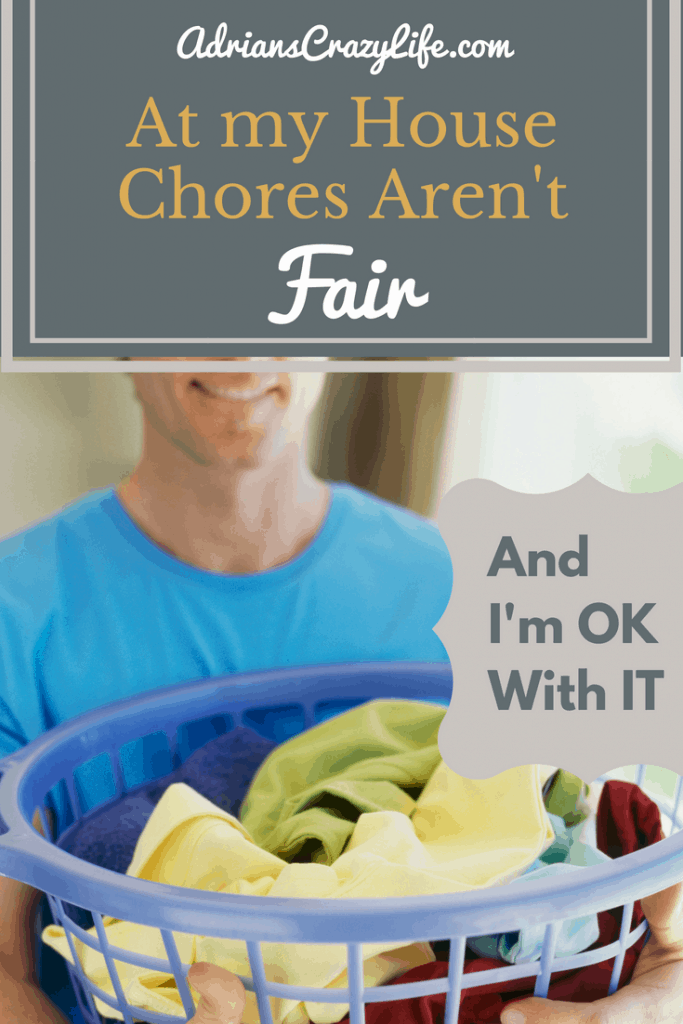 If the trash didn’t got out, it’s Matt – 100% of the time.  But if the dishwasher didn’t get emptied, it’s Blake – always and forever.  Well, until he grows up and moves out.  See how SIMPLE that is?  No muss, no fuss, and I can get straight to the “you’re grounded” or whatever part.  Do I get some whining about these chores aren’t fair?  Yep, but I can live with that.  Kids and chores are MY decision, not theirs!

But the other reason why kids chores aren’t fair at my house – LIFE isn’t fair!  I am raising kids who need to be prepared for the real world.  Does my boss care if my life is fair?  I’ve actually got an awesome boss, so he probably does, but I’ve had PLENTY of bosses who didn’t care.  College professors, bad neighbors, parking meter maids, and collections agents – they aren’t going to care if my little darling’s life is fair either. And I think regular chores are GOOD for kids.

So, I may as well let them get used to the idea and not bend over backwards trying to rig things to be fair.  Now, I’m not grossly unfair – the amount and complexity of the chores are fairly even.  I don’t give 8 chores to one kid and 3 chores to the other, that would be a little much.  But I think a little injustice in life is a good lesson in preparing for the real world.  I’ve even practiced my response to that “that’s not fair” declaration – and blank look followed by the words “and your point is???”

I think you can tell I was raised by a 70’s parent and rather than a millennial parent.  But I think there’s a lot to be said for old-fashioned parenting.  My Mom was awesome, but she was definitely not staying up nights worrying if I was eating a healthy diet (Banquet TV dinners, mostly) or if I was “fulfilling my potential” or whatever the current buzzwords are.

She was living her life and trying to make ends meet as a single mother of two.  I just happened to be a part of the entourage rather than the star of the show like most kids today.  I don’t know if that’s a healthy thing.  Sometimes kids really do need to take a backseat in the family.

But a little simplicity – that’s a nice thing for Mom and at least the kids know exactly what is expected of them – no surprises.  Give it a try – this could be a great change for your family.

Get Your Kids to Do Their Chores!

5 Tips to Manage Teen Boys and Their Beloved Electronics